The coins of the Austrian currency

All the coins were drawn by the artist Josef Kaiser. On all the drawings represent twelve stars of the European Union.

The Austrian coins are among the most beautiful from the point of view of the collectors: flowers, magnificent coins dedicated to the architecture, and the tribute in its glories.

The common Euro series are characterized, as for Greece, by the presence of the face value on both faces and by the small distinguishing feature, Austrian flag, red being represented by small vertical striation. No clear registration of the name of the country, or even its abbreviation, but also the repetition of the face value, Austria thus follows the instructions of the eutropéenne committee appearing in the Gazette of the European Commission n°2009 / 23 / CE.

The slices of the 2€ coins possess big or small stars.

The baronne Von Suttner, Mozart, the Palace of secession, the Palace of Belvedere, the cathedrale Saint Etienne of  Vienna,  the Primrose, the Edelweiss and the Gentian

Slice of the 2 € austrian coin

The eight motives the Austrian coins 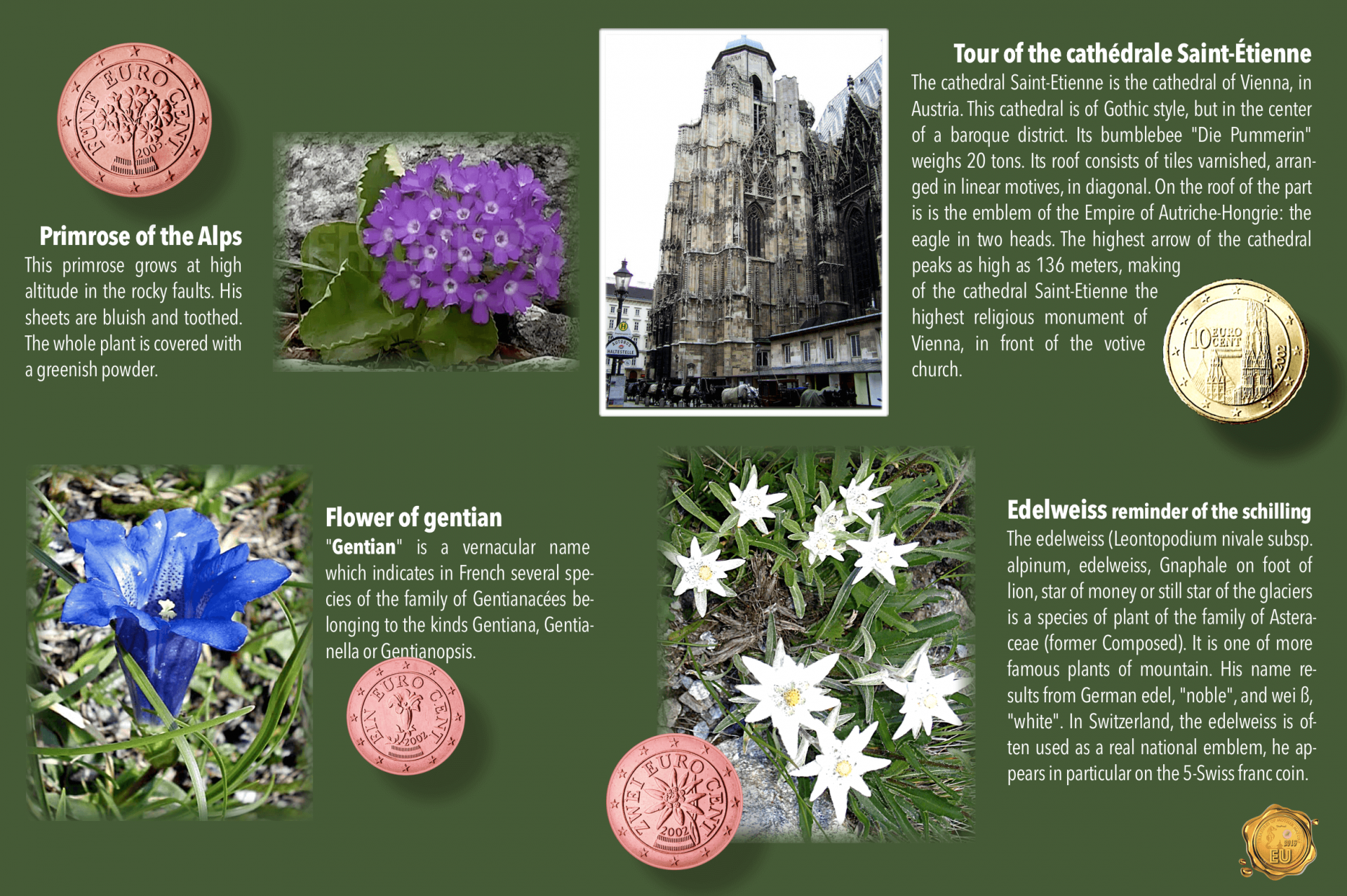 Carousel of the Austrian coins

The 2 series of austrian coins

The 1, 2 and 5-¢ coins represent Austrian flowers, the 10, 20 and 50-¢ coins of the buildings of the capital of Austria, Vienna, and the 1€ and 2€ coins of the famous Austrians. All the coins were drawn by the artist Josef Kaiser. On all the drawings represent twelve stars of the European Union 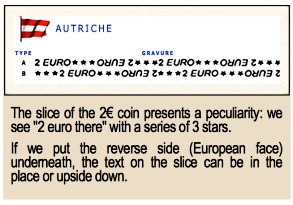 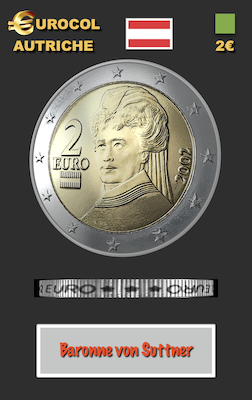 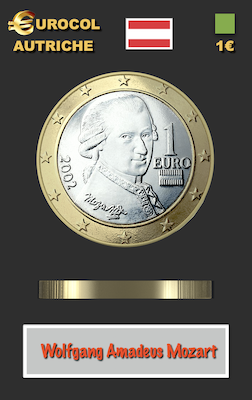 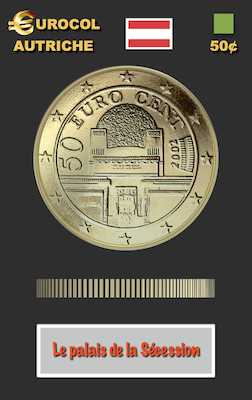 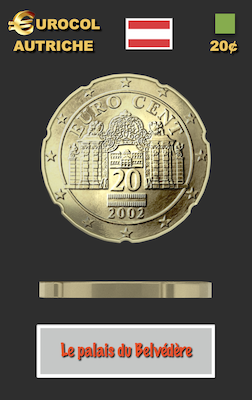 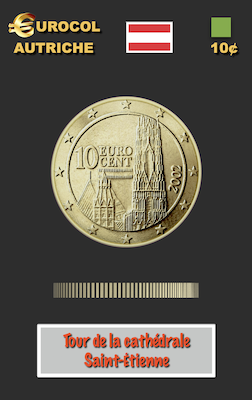 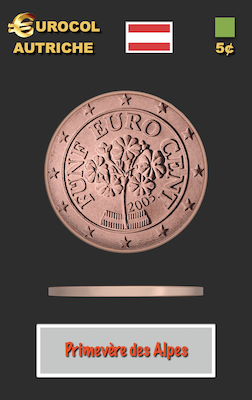 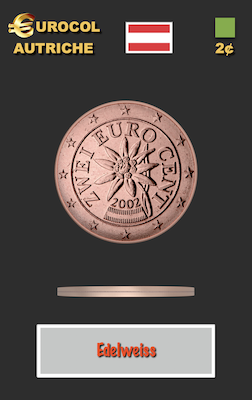 Austria in some figures

Coat of arms of Austria 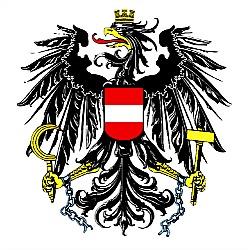 The Republic of Austria

Austria, in long form the Republic of Austria (Österreich and Republik Österreich in German), is a neutral Federal state of Central Europe, without access to the sea, and the member of the European Union. She is surrounded, clockwise, by Germany and Czech Republic in the North, Slovakia and Hungary in the East, Slovenia and Italy in the South, and by Switzerland and Liechtenstein on the West. 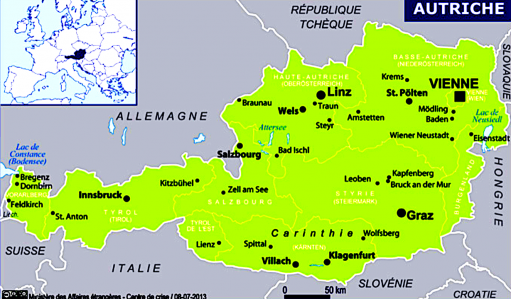 Austria is a member of the European Union (EU) and the Eurozone respectively since 1995 and January 1st, 1999. His official language is German, but since the ratification of the European Charter of the regional or minority languages, six other languages are recognized. Its capital and more big city is Vienna.
Until the proclamation in 1919 of the First Republic, Austria was, as State, a leading player of the history of Europe.
Austria is a neutral country, which does not make, for example, not left the NATO, unlike most of the countries européens6. The Austrian neutrality is a direct consequence of the negotiations for the Treaty of Austrian State (Staatsvertrag), signed on May 15th, 1955 in Vienna.

The country is a member of the European Free Trade Association from 1960 till 1995, then joins the European Union on January 1st, 1995.

The first written mention of the name Austria is in Historia gentis Langobardorum, and dates years 796. Österreichsignifie in old German "the east kingdom". Austria was the most oriental for a long time western countries. A crossing with its Latin equivalent, Austria (from the XIIth century), gave Austriche in average French, then Austria in French.
Österreich is diverted from Ostarrichi, first mention of the name of the country on a document which would date 996. Previously, the country was known under the name of Ostmark "walk east", created by the emperor of Germany Otton Ier.

Three more big cities are, in the order, Vienna, Graz and Linz.
The Alps occupy two thirds of the floor surface of Austria. The highest point is Grossglockner, which amounts to 3 797 meters.
The longest river is the Danube, which also crosses Germany, Slovakia, Hungary, Croatia, Serbia, Bulgaria, Romania, Moldaviaand Ukraine. Its route in Austria extends over 350 km.