The coins of the Belgian currency

The graphics of the euro coins of Belgium is the work of Jan Alfons Keustermans, director of the municipal Academy of the Fine arts of Turnhout. 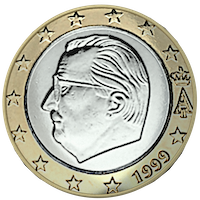 The Belgian coins - here coin "a" of 2000 - are not of great originality from the point of view of collectors:

Only one pattern - The King’s Left Profile.

Belgium had to modify twice its national faces to respect the recommendations of Brussels
See the detail on the blog of Eurocol : the-faces-of-belgian-national-coins 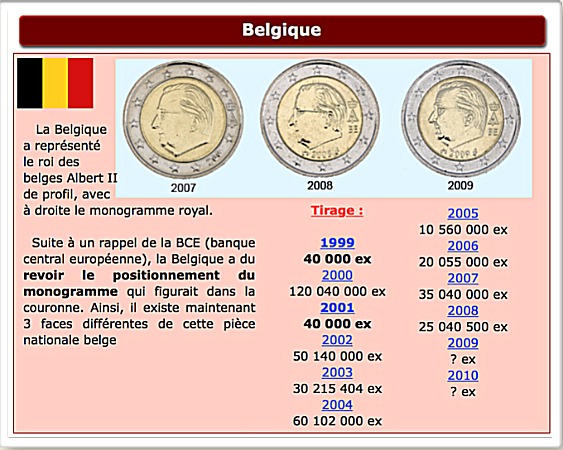 These coins present an unique motive  :

The effigy of the  King of the Belgians

Slice of the 2 € belgian coin 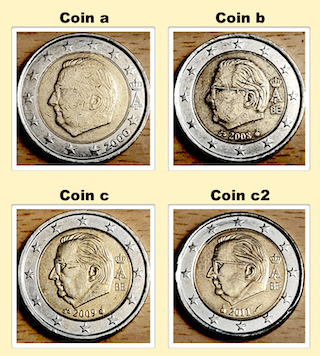 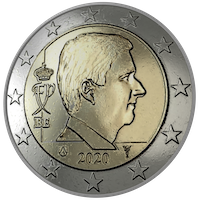 The unique motive of the Belgian coins 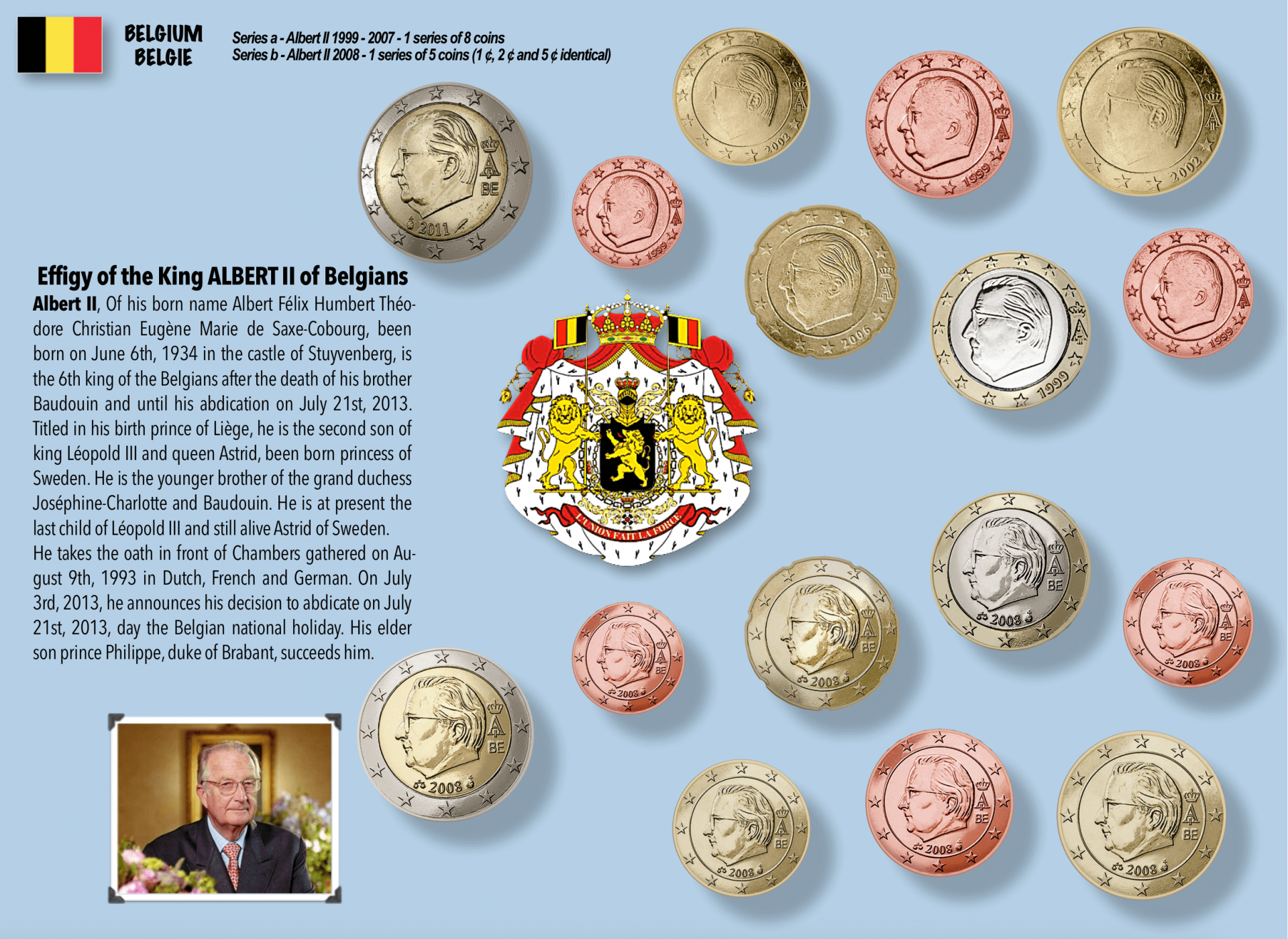 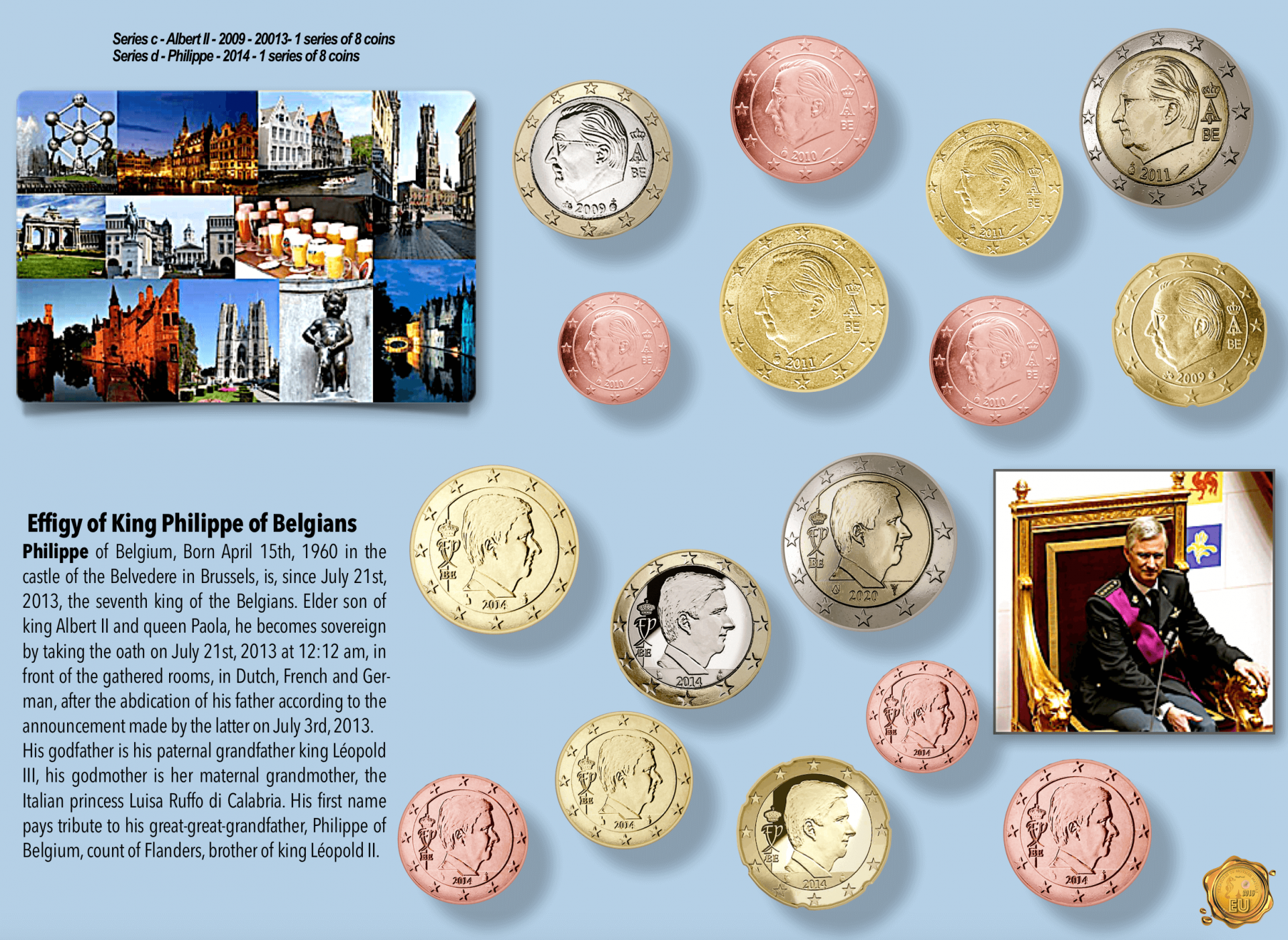 Carrousel of the Belgian coins - Albert II, King of Belgians

The graphics of the euro coins of Belgium is the work of Jan Alfons Keustermans, manager of the municipal Academy of the Fine arts of Turnhout. 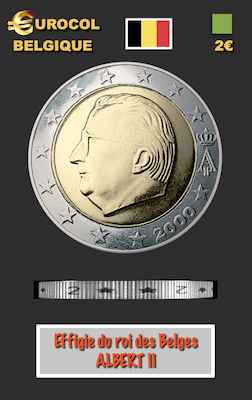 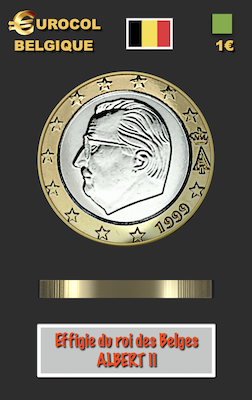 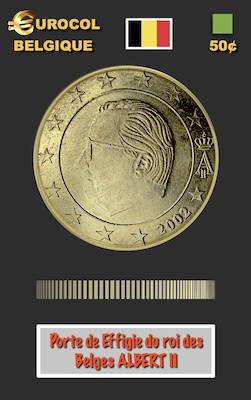 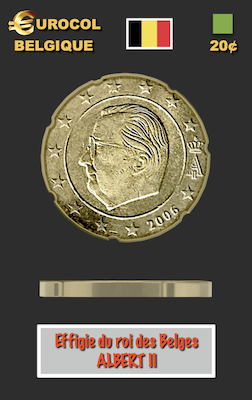 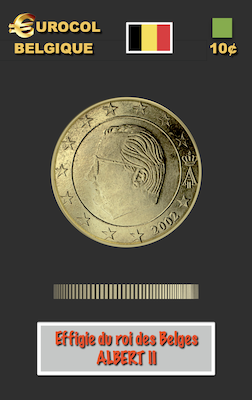 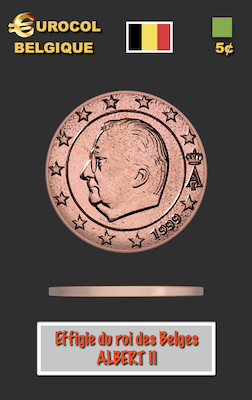 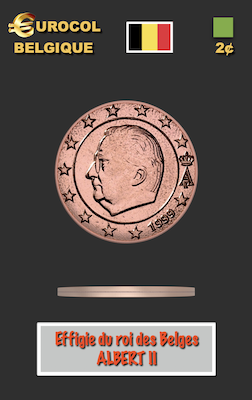 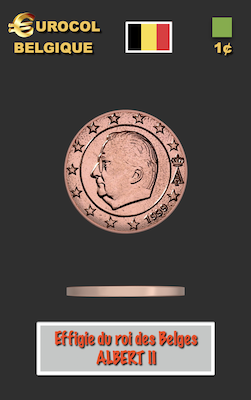 Carrousel of the Belgian coins - Philippe, King of Belgians

The graphics of the euro coins of Belgium is the work of Jan Alfons Keustermans, manager of the municipal Academy of the Fine arts of Turnhout. 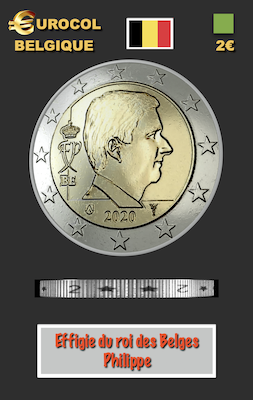 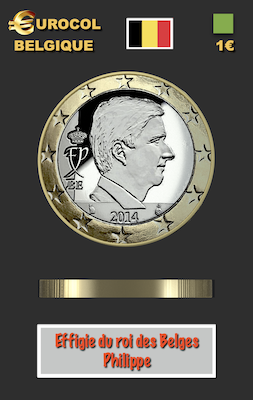 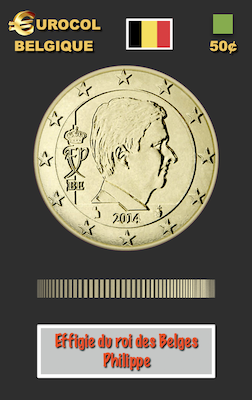 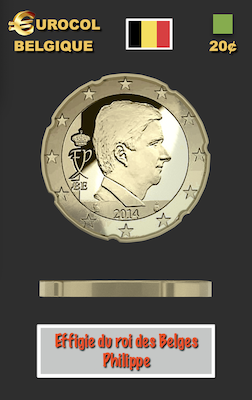 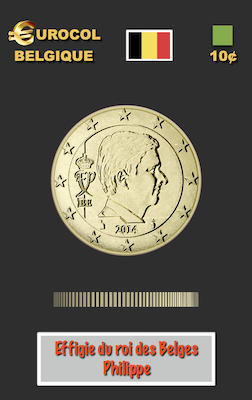 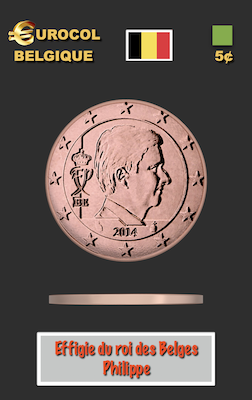 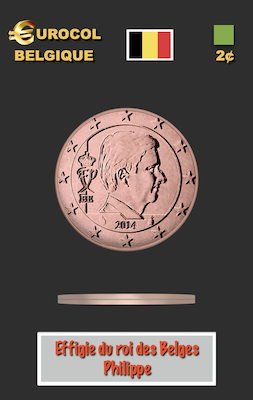 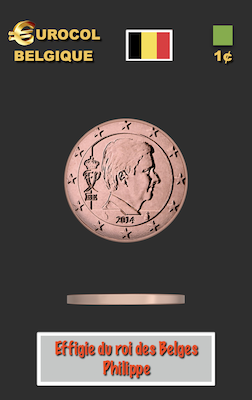 Belgium in a few figures

Coat of arms of Belgium 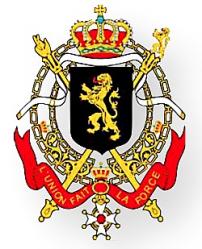 The Kingdom of Belgium

Belgium, in long form the Kingdom of Belgium, in Dutch België and Koninkrijk België, in German Belgien and Königreich Belgien, is a western european country, lined by France, Netherlands, Germany, Luxembourg and the North Sea. Politically, it is a federal constitutional monarchy with parliamentary system. She is one of the six country founding of the European Union the main institutions of which she welcomes, in her capital Brussels, (the European Parliament, the European Union Council and the European Commission), as well as those of the other organizations international as NATO. Belgium covers a surface of 30 528 km2 with a population of more than eleven million inhabitants. 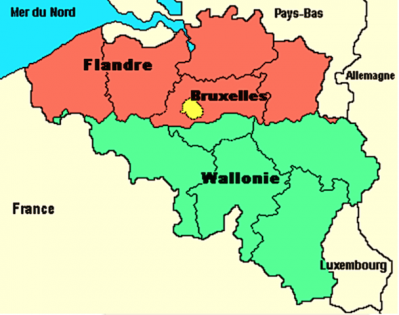 Situated halfway between Germanic Europe and Romanic Europe, Belgium shelter mainly two linguistic groups: the Dutch speakers, the members of the Flemish Community (which establishes 57 % of the population), and the French speakers, the members of the French Community (which represents 43 % of the Belgians). Furthermore, there is also a small group of German speakers, officially recognized. Two bigger Belgian regions are the Dutch-speaking region of Flanders in the North and the French-speaking region of Wallonia in the South. The Region of Brussels-capital, officially bilingual, is an enclave mainly French-speaking in the Flemish Region. The German-speaking Community is situated in the east of the Wallonia. The linguistic diversity of Belgium and its related political conflicts are reflected in its political history and its system of complex government.
Historically, Belgium, kingdom of the Netherlands and the Luxembourg were known under the name of the historic region of the Netherlands, which corresponded to a territory a little vaster than the current Benelux. The region was called Belgica in Latin, according to the Roman province of Gallia Belgica, which covered more or less the same surface. From the end of the Middle Ages to the xviie century, the territory corresponding to current Belgium was a prosperous and cosmopolitan shopping and cultural mall. Of the xvie century until the Belgian Revolution in 1830, when Belgium seceded from Netherlands, the Belgian territory was the theater of numerous battles between various European powers, what led him(it) to be nicknamed the " Battlefield of Europe ", a reputation which was strengthened by the World wars. Since its independence, Belgium participated in the Industrial revolution and, during the course(price) of the xxe century, it possessed several colonies(summer camps) in Africa. The second half of the xxe century was marked by tensions between the Flemish and Walloons because of the differences of languages(tongues) and the uneven economic development of both regions. This conflict led to several large-scale reforms, of which a transition of a unitarian State in a Federal state.
Continuation Wikipedia?