The coins of the Estonian currency

The euro coins of Estonia have an official rate in the Eurozone since January 1st, 2011. The drawing of coins was adopted on competition, on December 15th, 2004 by Eesti Pank ( the national bank).
Initially planned at the beginning of 2007, Estonia is the first ex-soviet republic to join the Eurozone.

The governor of Eesti Pank, Vahur Kraft, revealed that the winner of the competition for this choice was the drawing Hara 2 by Lembit Lõhmus who had obtained 12 482 votes (more than 27 % of the votes). The drawing represents the outlines of a map of Estonia and the word Eesti (which means Estonia in Estonian). " There are few countries in Europe which have an outline so attractive and easy to remember itself. The symbol is easy to memorize " indicated the artist.

These coins present a unique motive :

The outlines of the Estonian territory

Slice of the 2€ estonian coin

The unique motive of the Estonian coins 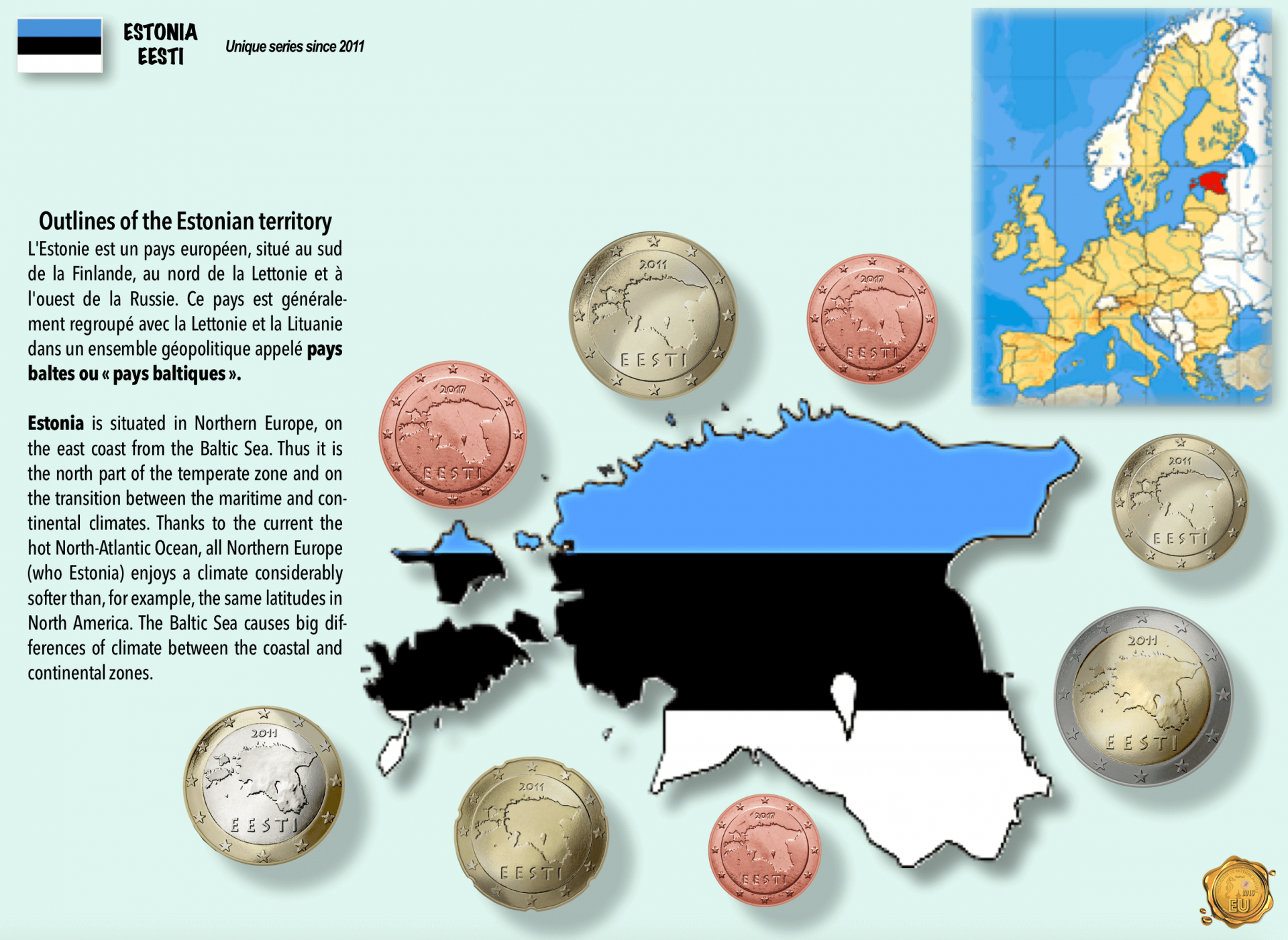 Carousel of the Estonian coins

Estonia does not possess her own broadcasting institute, it thus makes strike its currencies by institutes of the other Countries, by means of calls for tender.
To strike its Euros, in the vintage year 2011, the choice concerned to Rahapaja (Finland). It is netherlands that then took over from 2012 to strike the Estonian currency. 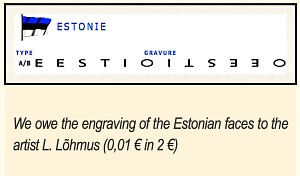 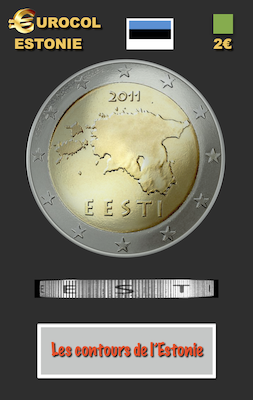 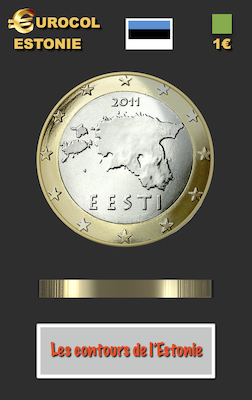 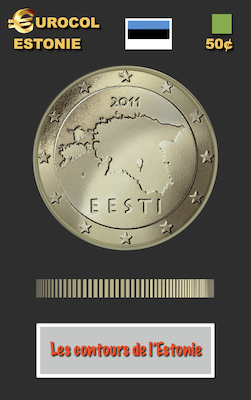 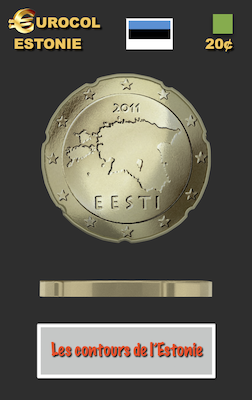 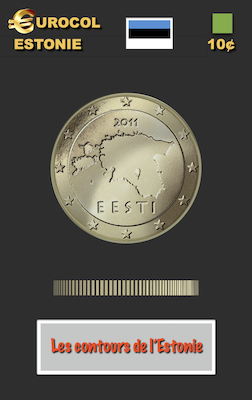 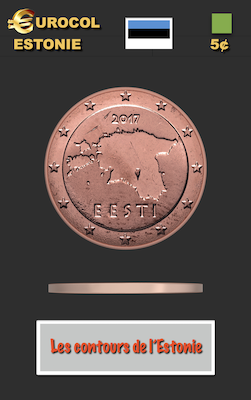 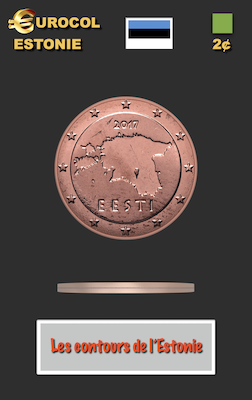 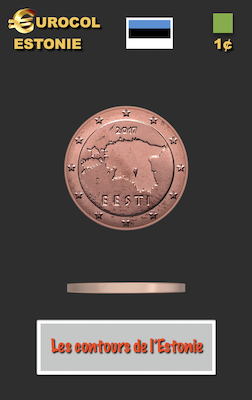 Estonia in a few figures

Coat of arms of Estonia 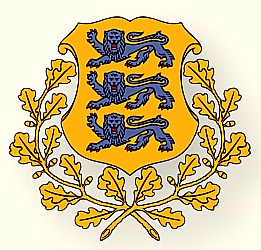 National anthem : My Homeland, my happiness and my enjoyment

The Republic of Estonia

Estonia, formerly spelt Esthonie, in long shape the Republic of Estonia, in Estonian Eesti and Eesti Vabariik, is a country of the Northern Europe and a Member state of the European Union, situated on the oriental bank of the Baltic and Southern Sea of the gulf of Finland. The country is lined in the North by the gulf of Finland, by the West by Sweden, in the South by Latvia and by the East by Russia. This country is generally grouped with Latvia and Lithuania in a geopolitical group called Baltic States. However, since his return in the independence in 1991, Estonia tries to get closer to Scandinavian countries. Estonia is a part of the European Union since May 1st, 2004 and integrated the Eurozone on January 1st, 2011. She(it) is a member of the NATO since March 29th, 2004. 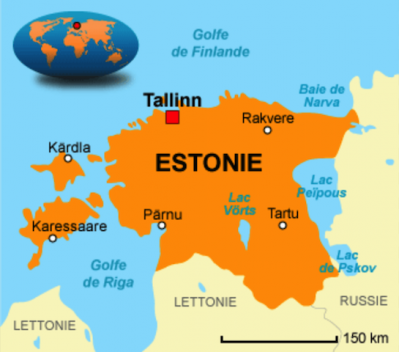 Estonia is one of three Baltic States but the used language is connected with a branch completely different from those spoken in Lithuania and in Latvia: the Estonian is a fennique language, as those spoken in Finland or in Karelia (Russia), the fenniques languages are a part of the finno - ougrienne family which includes the sames languages ( linguistic Lapland).
Having found his independence in 1991, the country, which opted for a liberal economic regime, knew a strong economic growth thanks to a successful reconversion of its industry and the implementation of modern infrastructures. Estonia entered violently recession during the economic crisis of 2008-2010 with in particular an unemployment rate upper to 14 %. The government settles as priority to reduce the inflation and to master the public finances. The country has, since 2009, most low rate of public debts of the European Union, performs convergence criteria and integrates the Eurozone on January 1st, 2011.

Estonia is also a member of the UNO, the WTO (WORLD TRADE ORGANIZATION), the Council of Europe, the NATO, the Council of the States of the Baltic Sea or still the OECD since 2010. The country is also an observer of the Scandinavian Council and the International Organization of the Francophonie since October, 2010.
Continuation Wikipedia