The coins of the German series

Germany is the first producer of rooms of all the Eurozone, in the launch of the common currency, it was 17 billion rooms that had been struck. To realize one such production, Germany has five monetary workshops. Every workshop possesses an awl in the form of letter which is affixed on currencies.

The workshop of Berlin prides to produce currencies since 1280. It is not the custom that the engravers sign their works. The quality of strike is excellent for five workshops and the FDC state can be quoted. The name of Germany appears on none of Euro currency of circulation contrary the first article of the Gazette of the European Commission to stipulate n°2009 / 23 / CE. Let us note finally that Germany is the first country to have announced that it would use from 2007 the new European lapel.

The Eagle impérial, The Brandenburg Gate and the Branch of oak

Slice of the German 2€ coin

Unity and right and liberty

The three motives for the German coins 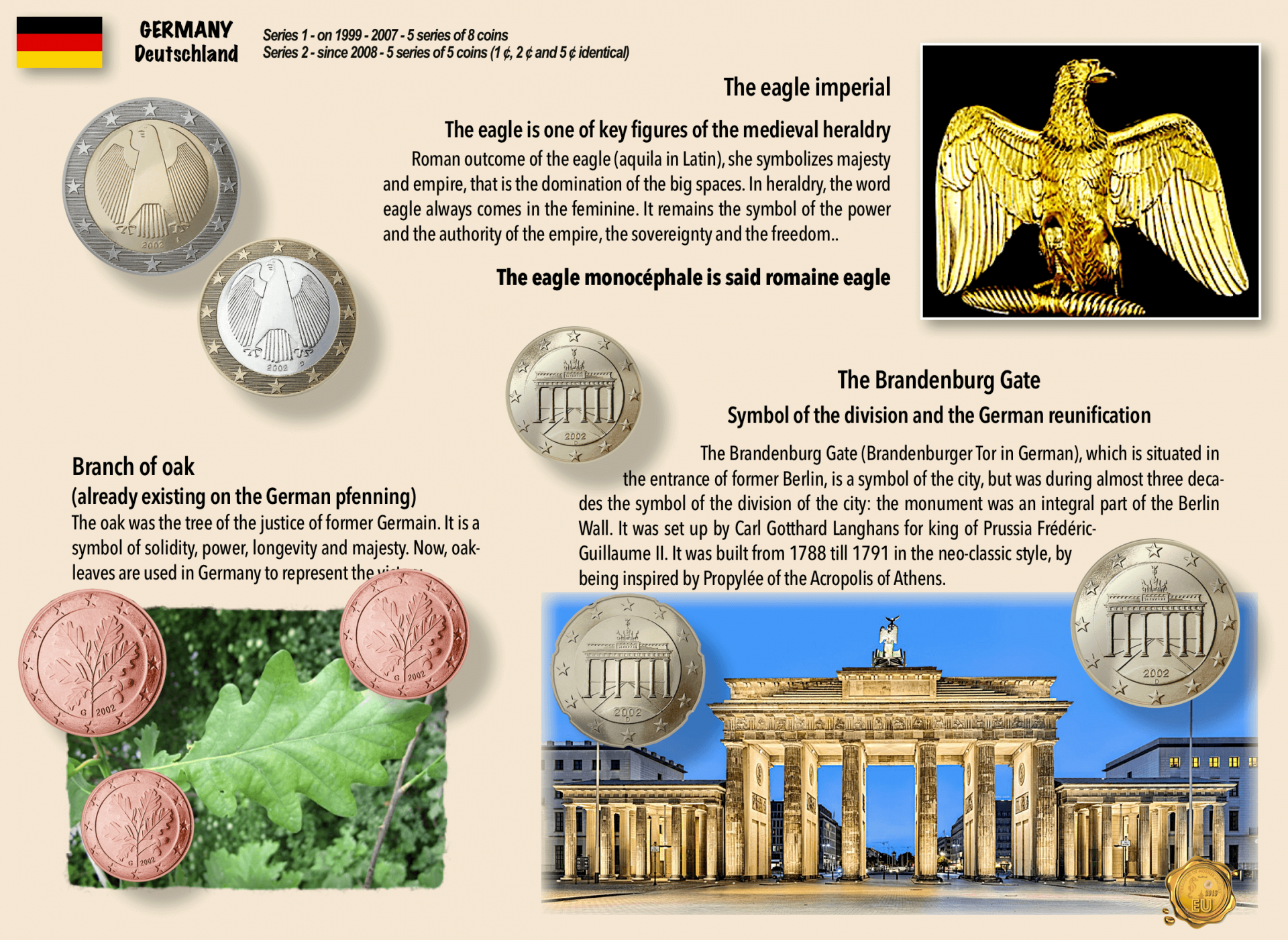 The eagle is the Roman symbol of the Empire, then of the Holy Germanic Empire.

He was accompanied by the serpent for a long time to evoke heaven-earth duality. Today, he symbolizes democracy.

Carousel of the German coins 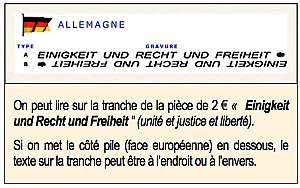 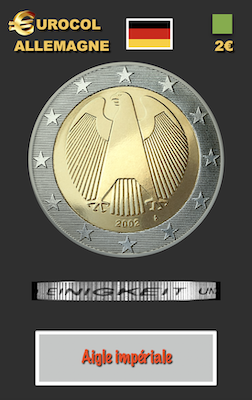 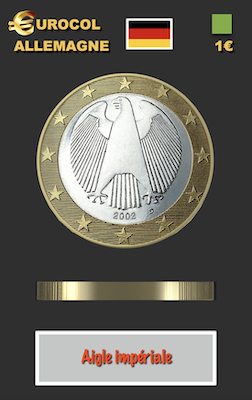 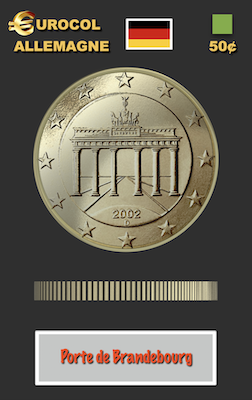 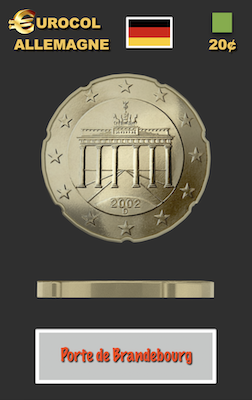 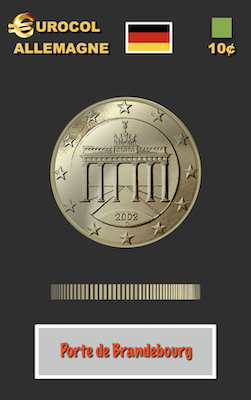 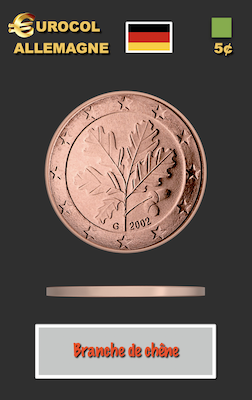 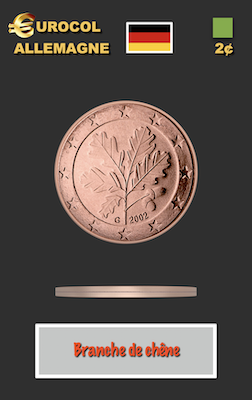 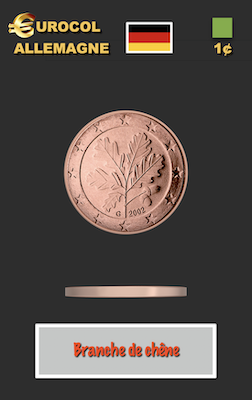 Germany in a few figures

(Unity and right and liberty)

Coat of arms of Germany 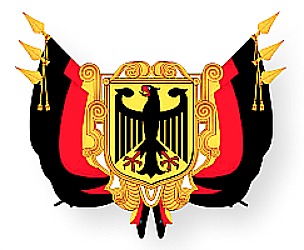 The Federal Republic of Germany

Germany, in long shape Federal Republic of Germany - FRG, in German Deutschland ( Bundesrepublik Deutschland), is a country of Central Europe, surrounded by the North Sea, Denmark and Baltic Sea in the North, by Poland and the Czech Republic in the East, by Austria and Switzerland in the South, and by France, the Luxembourg, Belgium and Netherlands on the West. Decentralized and federal country, Germany account four metropolises of more than a million inhabitants: the capital Berlin, as well as Hamburg, Munich and Cologne. The seat of government is situated in the city of Berlin and in the federal city of Bonn. The city of Frankfurt am Main is considered as the financial capital of Germany it is in this city where is the European Central Bank. 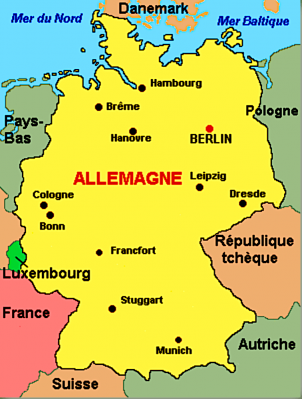 Various Germanic peoples occupy the North of the current territory since Antiquity classic. During what we name the barbaric invasions, the Germanic tribes extend southward. From the Xe century, territories train the central part of Germanic Roman Saint Roman Empire. In the XVIe century, the North of Germany is at the heart of the Protestant reformation. The Pan-Germanism pulls the unification of the German states in 1871 to train the German Empire. After the World War I, and the German Revolution of 1918-1919, the Empire is replaced by the parliamentary Republic of Weimar. The access to the power of the Nazis in 1933 leads to the Second World War, during which the dictatorial regime commits crimes of mass in Europe, of which Shoah. After its military defeat in 1945, Germany loses territories and - by the will of the allied winners who enter the "cold war" - is forced to split into two nations: On the West a democratic State, the Federal Republic of Germany (FRG) and, in the East, the German Democratic Republic (GDR) under influence of Soviet Union. The Berlin Wall - Which symbolizes this division in the former capital - falls November 9th, 1989 and Germany is reunited again on October 3rd, 1990, with again Berlin for capital.

Germany is also the 1st economic power of Europe as well as the 4th world economic power and it matters among the most successful and the most developed industrialized countries in the world. She represents among the world first ones in the sectors of the aeronautics, the automobile, the chemical industry and some mechanical engineering. Germany is in 2011 the second world exporter and it is the country presenting the biggest trade surplus of the world. She also has the lowest unemployment rate among 19 Member states of the Eurozone, this rate becoming established in 3,9 % in December, 2016, according to Eurostat. Germany shows a "very high" standard of living: she is 4th in the classification IDH in 2016.

Germany is a member founder of the European and member Union of G7, G20, Eurozone, the Schengen area and NATO; she(it) shelters the seat(siege) of the European Central Bank, the international Court of the maritime law and the European Patent Organization.