The coins of the Greek currency

Eight coins of the different drawings: the coins of 1, 2 and 5 ¢ represent Greek boats, the coins of 10, 20 and 50 ¢ famous Greeks and the 1 and 2-coins of the drawings of the Greek mythology.
The value of coins is repeated in the Greek alphabet on the national face. The Greek coins have a peculiarity of strike. As they were struck in various countries of the Union, a letter situated in a star allows to identify the country in which the coin was struck:

The kidnapping of Europe by Zeus, the great Athenian, Elefthérios Venizélos, Ioannis Capodistrias, Effigy of Riga Féréos, A modern tanker, a corvette and a modern trireme

Slice of the 2€ greek coin

The eight motives of the Greek coins 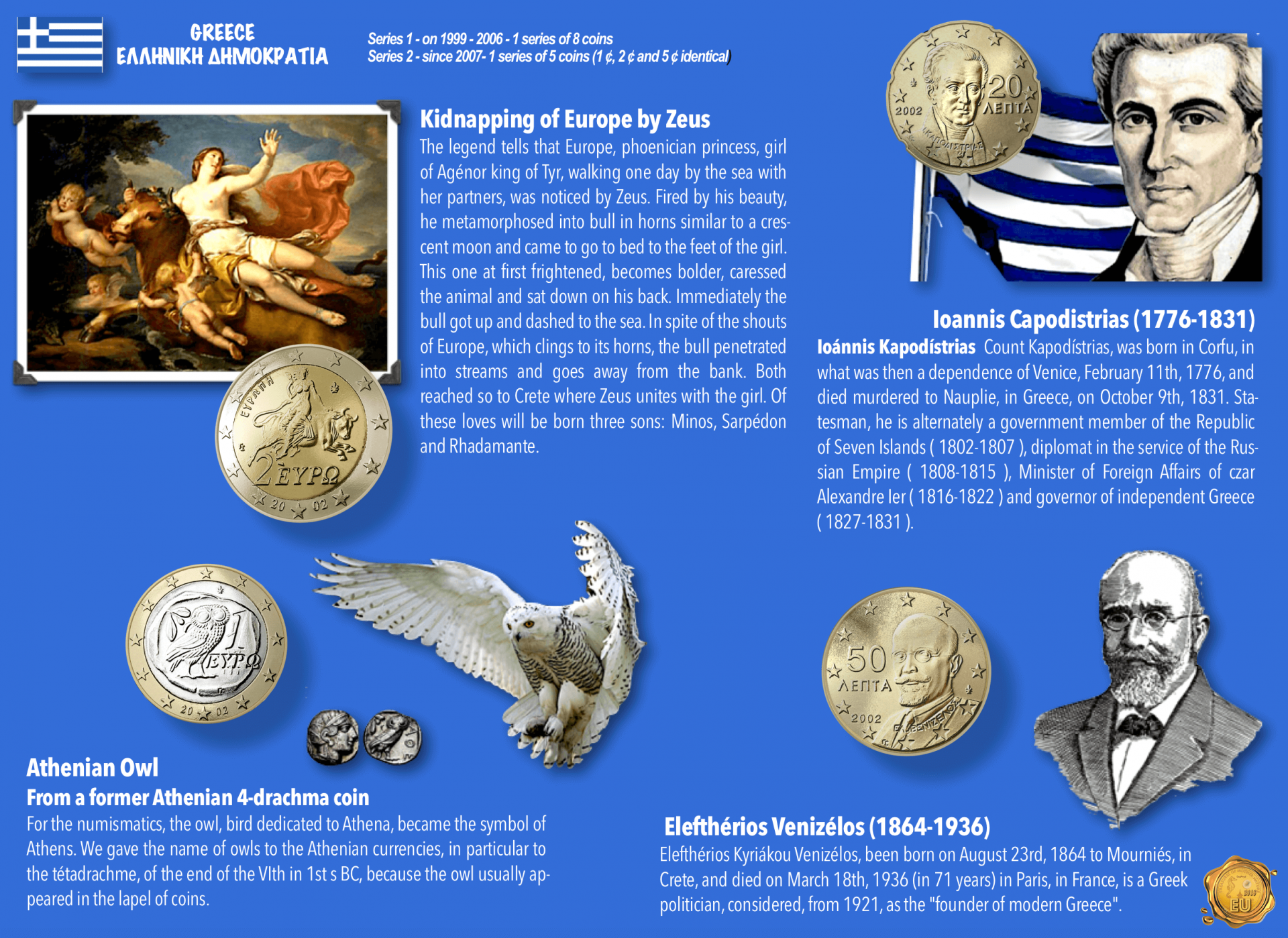 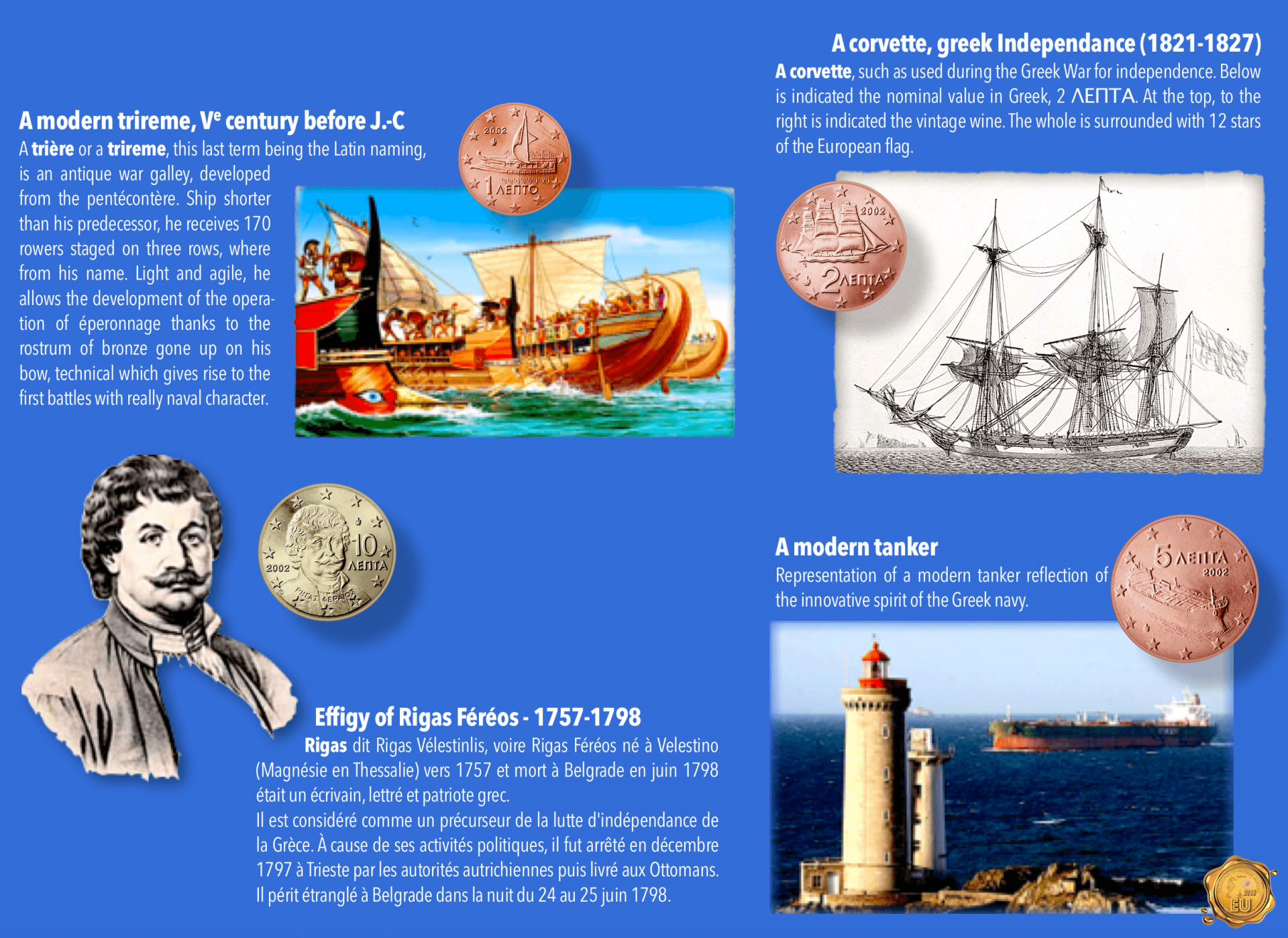 Carousel of the Greek coins

Series 1 et 2 of the Greek coins 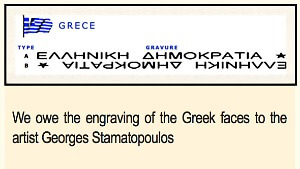 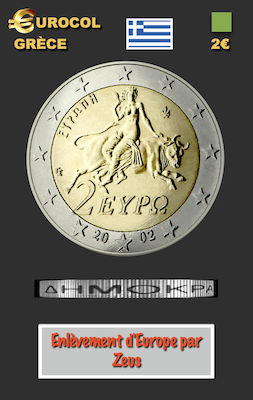 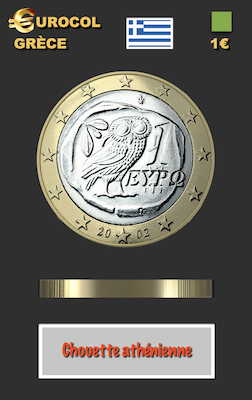 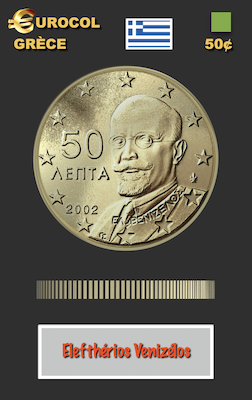 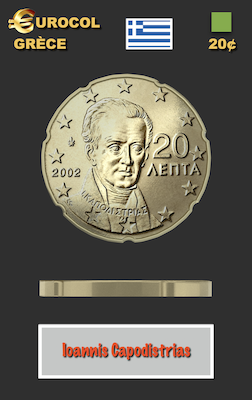 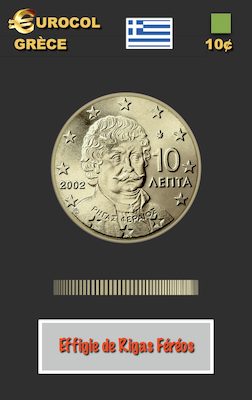 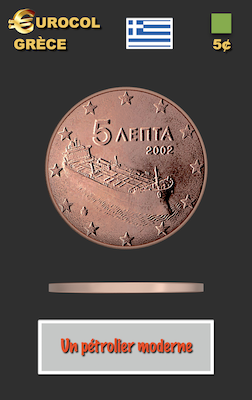 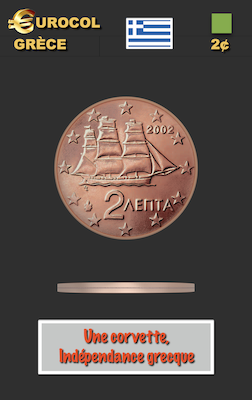 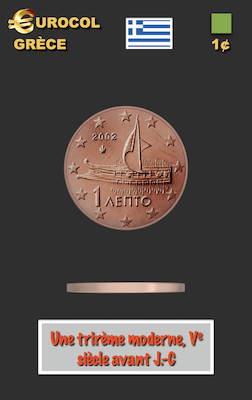 Greece in a few figures

Slogan : The liberty or the death

Coat of arms of Greece 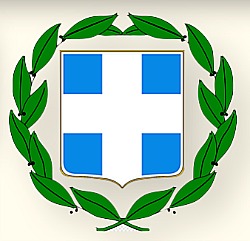 National anthem : Hymn to the Liberty

Greece, in long shape the Hellenic Republic, is a State of Southern Europe and member of the European Union, situated in the extreme the South of the Balkans. Its capital and its most big city is Athens.

Greece, of a surface of 131 957 km2 for a little less than eleven million inhabitants, shares ground borders with Albania, Former Yugoslav Republic of Macedonia, Bulgaria and Turkey and shares maritime borders with Albania, Italy, Libya, Egypt and Turkey, this last source of dispute. The Ionian Sea on the West and the Aegean Sea in the East, left the Mediterranean Sea, supervise the country the fifth of the territory of which is constituted by more than 9 000 islands and islands among which about 200 are inhabited. Furthermore, 80 % of its territory is constituted by mountains the highest of which is the mount Olympus with 2 917 meters 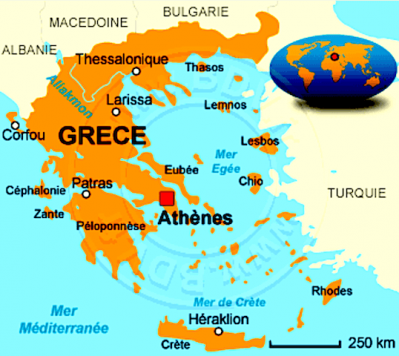 The history of the region which constitutes its current territory is very rich. Antique Greece, with its cities, its philosophy, its democracy or its theater, strongly influenced Roman Empire and became, since the Renaissance, one of the models of European culture and the modern western civilization. By hellenizing, Roman Empire of East became a Greek empire, just like hits States successors (Trabzon, Epiré, Mistra or Doros). The Greek influence and the presence throughout its periods exceeded the limits of the current territory: cities and Greek populations of Asia Minor and the circumference of the Black Sea, Empire of Nicée, despotat of Dobrogée in the xive century or principalities of Valachie and Moldavia in the period phanariote in the xviiie century.
It is at the beginning of 1830s that the first Greek State independent from the modern era lives in the daytime, following a war for independence against Ottoman Empire.

Greece is situated in the south extremity of the Balkan Peninsula, approximately between 34°48 ' in 41°45 ' of north latitude and 19°00 ' in 28°30 ' of longitude is. She has a surface of 131 957 km2 (3,3 % of the surface of the European Union). Her coast is long 15 000 km2.
Her territory includes three geographical units: continental Greece, peninsula of Péloponnèseet the islands which represent the fifth of the total surface of the country. The Greek coast is lined on the West by the Ionian Sea and by the East by the Aegean Sea where are the majority of the Greek islands. The only islands of the Aegean Sea not to be Greek are Imbros and Ténédos. The number of islands in Greece varies according to the chosen definition: 9 841 according to the Embassy of Greece in France or 3 000 among which worthwhile 777 according to certain guides.
Continuation Wikipedia