Coins of the Portuguese currency

The euro coins of Portugal represent three different drawings following the series of coins. However, they are very similar, as far as all present old royal seals surrounded with seven castles, with five coat of arms, and with word "PORTUGAL".

The Portuguese coins are represented by Alphonse Henri's royal symbols, conscripts " Palavra-Sinal Portugal ". The purpose was to create a strong personality a strong presence of the national identity. This objective was looked through the composition and the drawing of the used elements. The author of the Portuguese faces is: Victor Santos.

Slice of the 2€ portugese coin

The three motives of the Portuguese coins 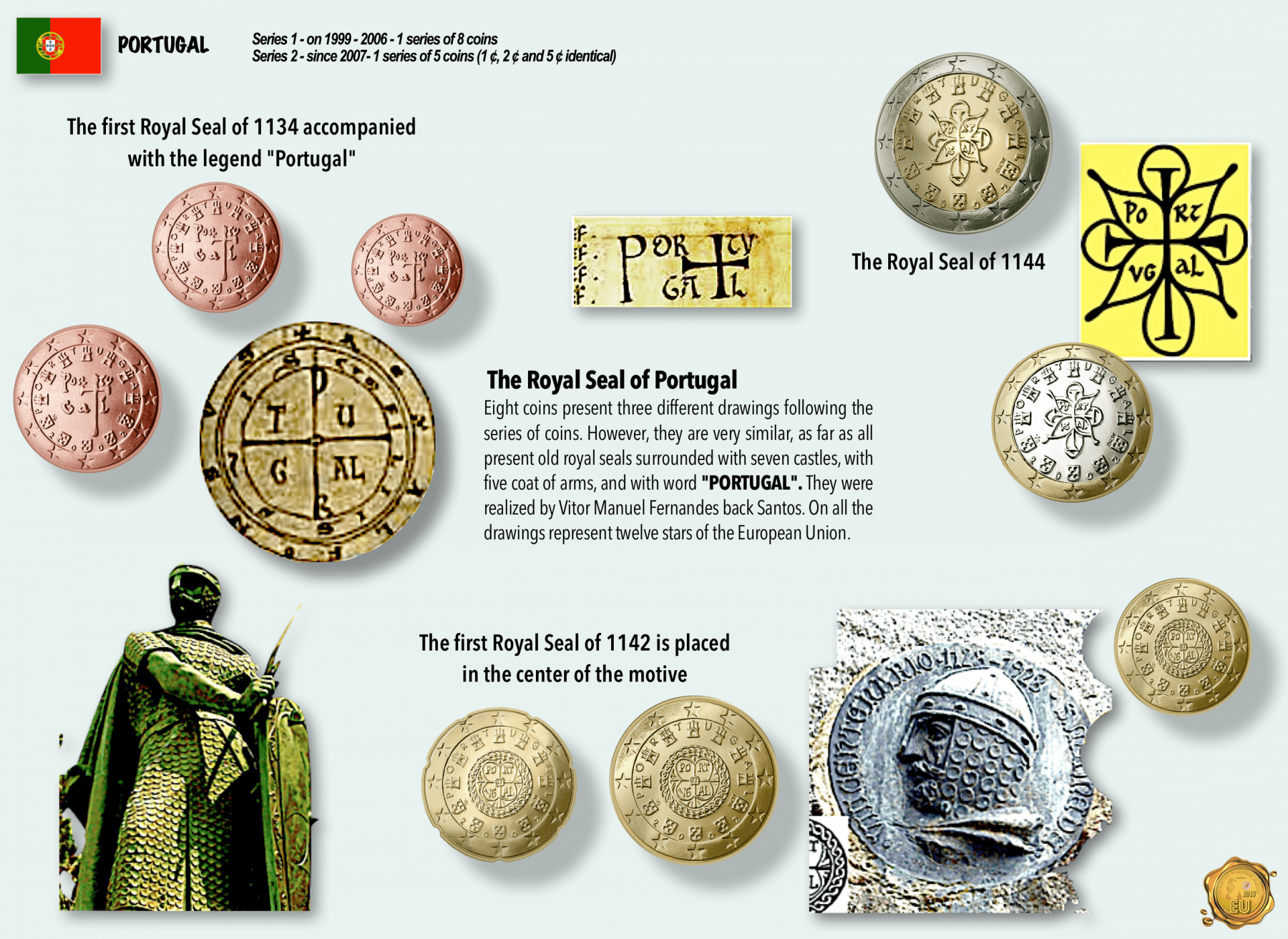 Carousel of the Portuguese coins

The 2 series of the portugese coins 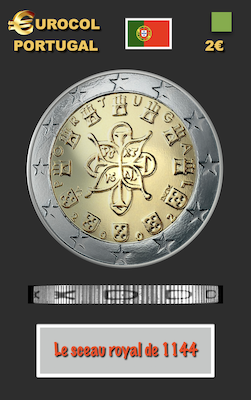 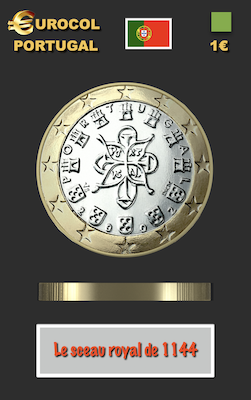 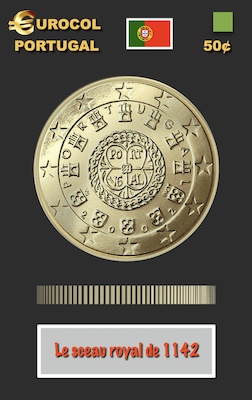 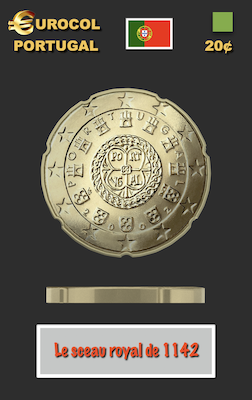 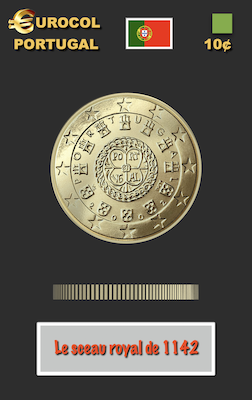 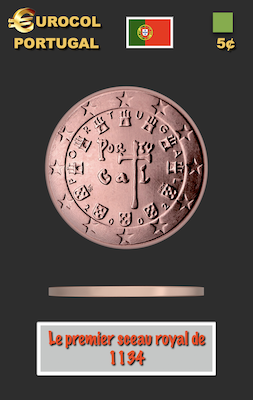 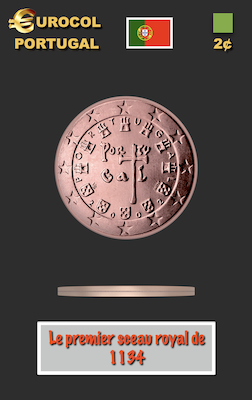 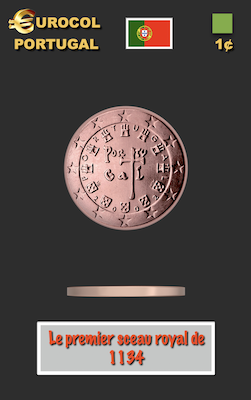 Portugal in a few figures

Coat of arms of Portugal 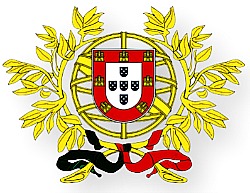 National anthem : A Portuguesa - The Portugese

Portugal, in long form the Portuguese Republic, in Portuguese: República Portuguesa, is a country of the South of Europe, member of the European Union, situated on the West by the Iberian Peninsula. Bounded in the North and in the East by Spain then in the South and on the West by Atlantic Ocean, it is the more western country of continental Europe. He also understands the Azores Archipelagoes and of Madeira, two autonomous regions were situated in the North of the Atlantic Ocean.

Founder member of the NATO, Portugal is closely linked politically and militarily with the set of the other western countries.He is also a member of the OECD, of the UNO, the Council of Europe, the Schengen area and is one of the founding countries of the Eurozone. Portugal maintains on top of important relations with Spain, France, Germany, the United Kingdom and Italy, which are his five more important business partners. 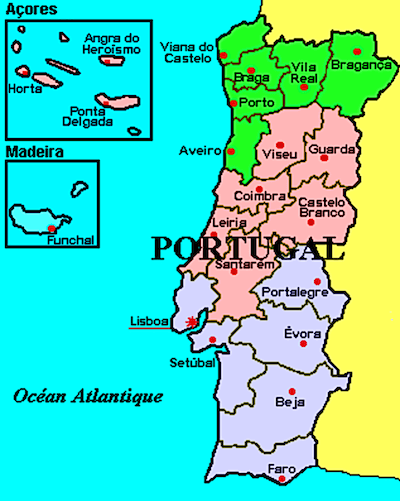 The tourism, mainly seaside, is a very important resource, in particular in Algarve and in the region of Lisbon. The subtropical climate of Madeira and its singular landscapes make a tourist destination appreciated. Portugal is one of the countries the most visited to the world with more than 25 million tourists every year. It is also a big wine-making country, considered in particular as the port wine. Portugal is besides the first world producer of cork. Portugal shines finally thanks to the big events which it organizes. Its capital, Lisbon, so welcomed the World Fair on the theme of the oceans in 1998. It also applied, together with Spain, for the organization of the Soccer World Cup of 2018 having been the host of the European championship in 2004.

In the North of the country, the landscape is mountainous; in the center and in the South extend trays convenient to the agriculture.
Of Lisbon, until Alentejo, the relief is rather characterized by plaines. Portugal is crossed by several rivers, some rising in Spain as Douro, in Minho, in Guadiana and the most famous, the Tagus. Other important rivers are born, them, in Portugal as Mondego, Sado and Mira. The country counts several ecoregions the forest of which sclérophylle and semi-null and void iberian.
The islands of the Azores are located on a rift valley in the middle of the Atlantic Ocean. Some of his islands entered a volcanic reaction recently as to São Miguel in 1563 and Capelinhos in 1957, what allowed an enlargement of the surface of the Faial Island. With all these volcanic eruptions, a new island could appear in a near future.