The coins of Vaticane series

We owe the engraving of in front of the artist Guido Veroi for the series John-Paul II.
The series Sede Vacante represents the coat of arms of cardinal Camerlingue, lasting the transition between John-Paul II and Benoît XVI
For the series Benoît XVI: coins were engraved by Maria Angela Cassol coin of 20 and 50 ¢), Luciana de Simoni coins of 1 and 2 ¢), Ettore Lorenzo Frapiccini coins of 5 ¢ and 1 €) and Maria Carmela Colaneri (10 ¢ and 2-coin).

Slice of the 2€ vatican coin

The unique motive of the Vatican coins - Series John-Paul II

Karol Józef Wojtyla (Wadowice, near Cracow, in Poland, in May 18th, 1920 - Vatican, in April 2nd, 2005) is a Polish priest, a bishop then an archbishop of Cracow, cardinal, elected catholic pope on October 16th, 1978 under the name of John-Paul II (in Latin Ioannes Paulus II, in Italian Giovanni Paolo II, in Polish Jan Pawel II). It is known as saint Jean-Paul II by the Catholics since its canonization in 2014.
His pontificate (26 years, 5 months and 18 days) is this longest third day the catholic history after that of the Saint Peter and Pie IX. II traveled more than 129 countries during his pontificate, more than five hundred million people having been able to see him during this period, and established by big gatherings, as World Youth Days. He beatified 1 340 people and canonized 483 saints, is more than during the previous five centuries.

John-Paul II is generally considered as one of the most influential political leaders of the xxe century. More still, he is presented more and more as the model of the new evangelization, carried by his whole vision pastoral and embodied to his holiness of life. Beatified on May 1st, 2011 by his successor pope Benoît XVI, then canonized by pope François on April 27th, 2014, he is considered as saint by the catholic religion and celebrated on October 22nd, a date of his papal enthronement.
Continuation Wikipedia

The unique motive of the Vatican coins - Vacancy of the Seat

Carousel of the Vatican coins - Vacancy of the seat

The series vacancy of the Seat 2005

Series 2 - Vacancy of the Seat

Sede vacant (ablative absolved from the Latin sedes vacans: "the seat [being] vacant") is the Latin expression used to qualify the period in the course of which the seat of a diocese or the Holy Chair (diocese of Rome) are vacant; in this last case, it is the vacancy of the apostolic Seat.
The vacancy of the seat of Rome intervenes by the death of the Roman pontiff or the renunciation at his expense made freely and duly shown; other episcopal sees become vacant by the death of the bishop which is a holder, by her renunciation accepted by the Roman pontiff, by his transfer or the hardship which would have been notified to him.
The code of canon law and the particular laws regulate then the government of these institutions.
In French, the canon law uses the expression "vacancy of the seat", but the canonists usually use that of "sedisvacance", formed directly on the Latin expression.
Vacancy of the apostolic seat​

The vacancy of the Holy See is the period which extends between the death or the renunciation of the Roman pontiff and the election by the conclave of his successor. In this case, Holy Chair is administered by the cardinal camerlingo which, by means of three cardinals assistants, establishes the special congregation asked to pilot the daily measures, watching to obtain for the most important questions, the vote of the College of Cardinals.
The previous apostolic vacancy of the seat lasted of February 28th, 2013 (renunciation of Benoît XVI) on March 13th following (election of François).
As regards the emission of the presented rooms, it corresponds to the vacancy from 2 till 19 April 2005 (death of John-Paul II).
Continuation Wikipedia

The unique motive of the Vatican coins - Benoit XVI

Joseph Aloisius Ratzinger, been born on April 16th, 1927 to Marktl, in the Free state of Bavaria, in Germany, is a prelate and a German catholic theologian. He exercises bishop's load of Rome and is, according to the catholic Tradition, the 265th Supreme Pontiff of the Roman Catholic Church, from April 19th, 2005 till February 28th, 2013, under the name of Benoît XVI (in Latin: Benedictus Decimus Sextus; in Italian: Benedetto Sedicesimo; in German: Benedikt der Sechzehnte).
On February 11th, 2013, after a pontificate of about eight years, he announces that he gives up his functions, this coming into effect decision on the next February 28th. He becomes from then on, and in a unpublished way, "His Holiness Benoît XVI, highly skilled Roman pontiff". The highly skilled pope lives so removed in the Monastery Mater Ecclesiae from where he goes out only to attend some important events, by invitation of pope François, who succeeded him on March 13th, 2013.
Continuation Wikipedia

The unique motive of the Vatican coins - Pope François

Jorge Mario Bergoglio, been born on December 17th, 1936 in Buenos Aires (Argentina), is a man of the Church, a 266th and current bishop of Rome and pope of the Roman Catholic Church under the name of François (in Latin: Franciscus), since his election on March 13th, 2013. He was previously an archbishop of Buenos Aires and cardinal.
Bergoglio is the first pope stemming from rows of the Society of Jesus, the first not European pope since the Syrian pope Grégoire III in the viiie century as well as the first one stemming from the American continent. He is also the first pope to take François's name, name chosen in memory of Saint Francis of Assisi.
Continuation Wikipedia

Carousel of the Vatican coins - Coat of Arms of Pape François

The series Coat of arms of pope François 2017

THE ECU
In his lines, essential, Pope François decided to preserve his previous blazon, chose since his episcopal consecration and characterized by a linear simplicity.
The blue ecu is surmounted by the papal symbols of the dignity, identical to those wanted by his predecessor Benoît XVI placed between keys décussées by gold and by silver, connected by a red cordon. At the top pull the emblem of the order of origin of the Pope, the Society of Jesus: a radiant and blazing sun in charge of letters, in red, ihs, monogram of the Christ. The letter H is surmounted by a cross; down three nails in black.
Below, we find the star and the flower of nard. The star, in the classic art heraldic tradition, symbolizes the Virgin Mary, Mother of the Christ and the Church; whereas the flower of nard indicates saint Joseph, boss of the universal Church. In the Hispanic iconographic tradition, indeed, saint Joseph is represented with a branch of nard to the hand. By placing in his ecu these images, the Pope wished to express his particular worship in her Very saint Vierge and to saint Joseph.

THE SLOGAN
The slogan of the Holy Father François is pulled by Saint Bède's homilies the respectable, the priest (Hom. 21; ccl 122, 149-151), who, by commenting on the evangelic episode of saint Matthieu's vocation, paper: Vidit ergo lesus publicanum and quia miserando atque eligendo vidit, has illi Sequere me (" Jesus lives a publicain and as he looked at him with a feeling of love and chooses him, he tells him: Follow me ").

Vatican in a few figures

Coat of arms and flag of Vatican 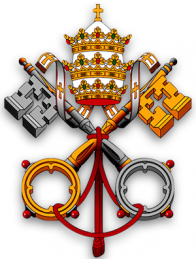 Vatican, in long shape the Vatican City State (in Italian Stato della Città del Vaticano, in Latin Status Civitatis Vaticanæ) is a country of Europe. It is about the territorial supporT of the Holy See enclosed in the Italian city of Rome. In 2014, IT account 921 inhabitants on a total surface of 0,44 km2, what makes it the smallest State for the world as well as the least populated.

The hill of Vatican is already mentioned under the Roman republic. Nowadays, Vatican is the temporal representation of the Holy See and all the institutions of the Roman Roman Catholic Church: the Vatican City State is, him, created on February 11th, 1929 at the end of the agreements of Latran, signed by Italy represented by Mussolini and by Holy Chair represented by cardinal Gasparri. 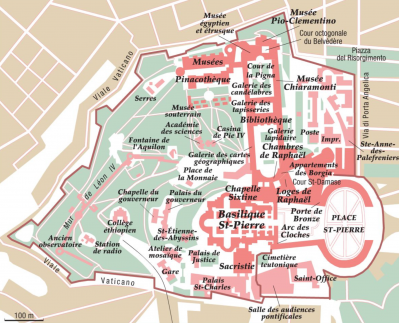 Vatican, importing archeological site of the Roman world, situated on the hill of the same name, is the siege of the papacy and the catholic world. According to the catholic tradition, it goes back to very Saint Peter, as first bishop of Rome and is the official center of all the Christianity since emperor Constantin (ive century), but this point of view is not necessarily shared by all the historians nor by all the Christian confessions.
Vatican is a state of type absolute monarchy, of divine right and elective managed by the Bishop of Rome, that is at present pope François, elected on March 13th, 2013, following the renunciation of Benoît XVI, on February 28th of the same year. The Pope exercises there supremely the triple executive, legislative and judicial power.
Continuation Wikipedia

Thank you Wilcox for your comments

It's amazing to pay a quick visit this site and reading the views of all friends about this piece of writing, while I am also
zealous of getting experience.