General explanations, structure and organization of the collection EUROCOL 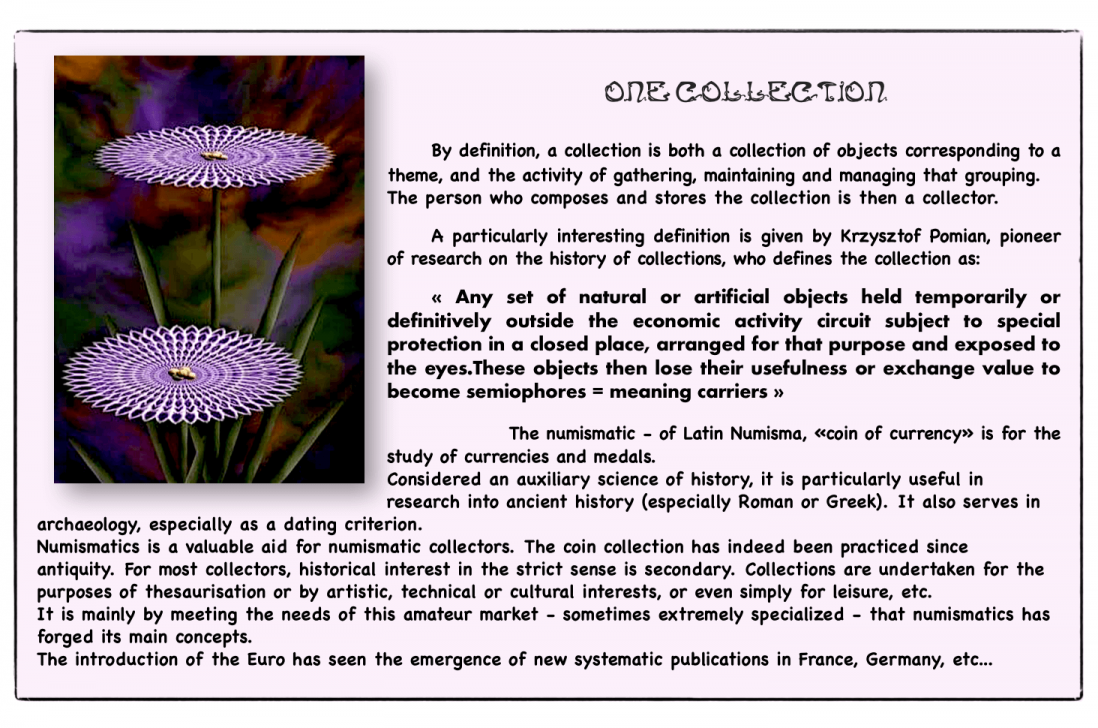 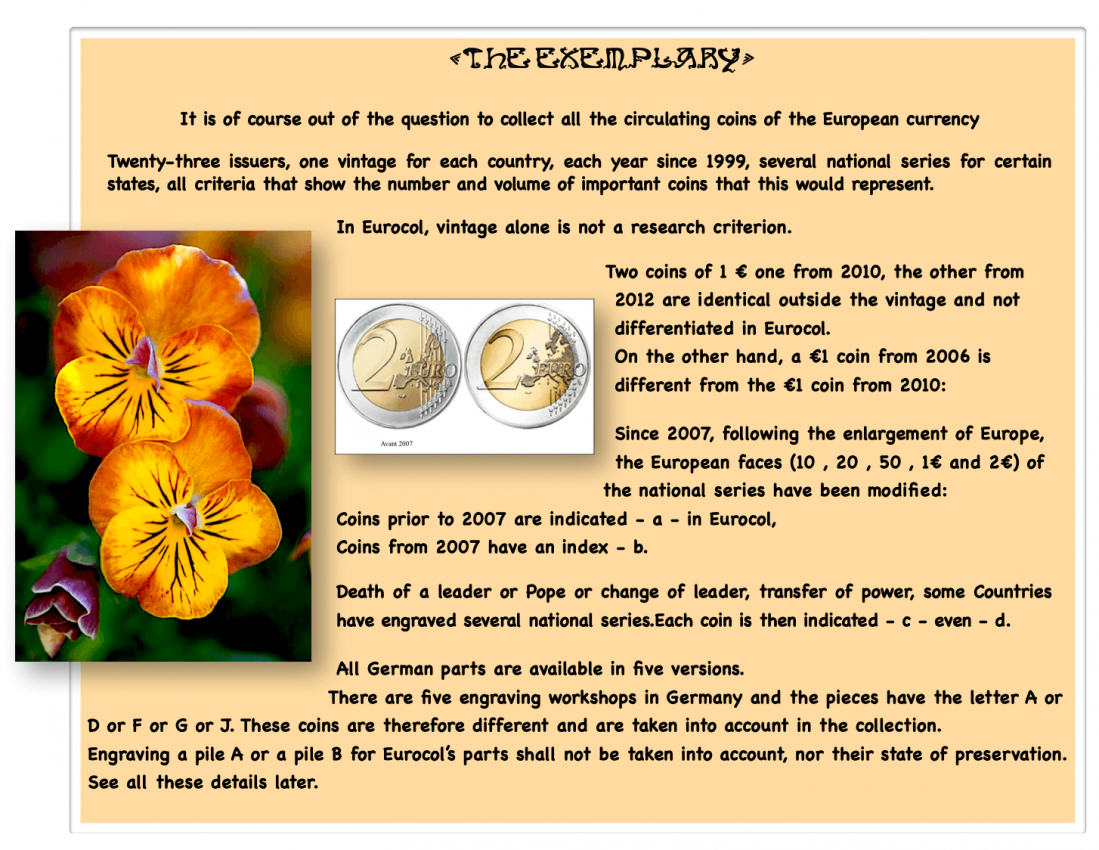 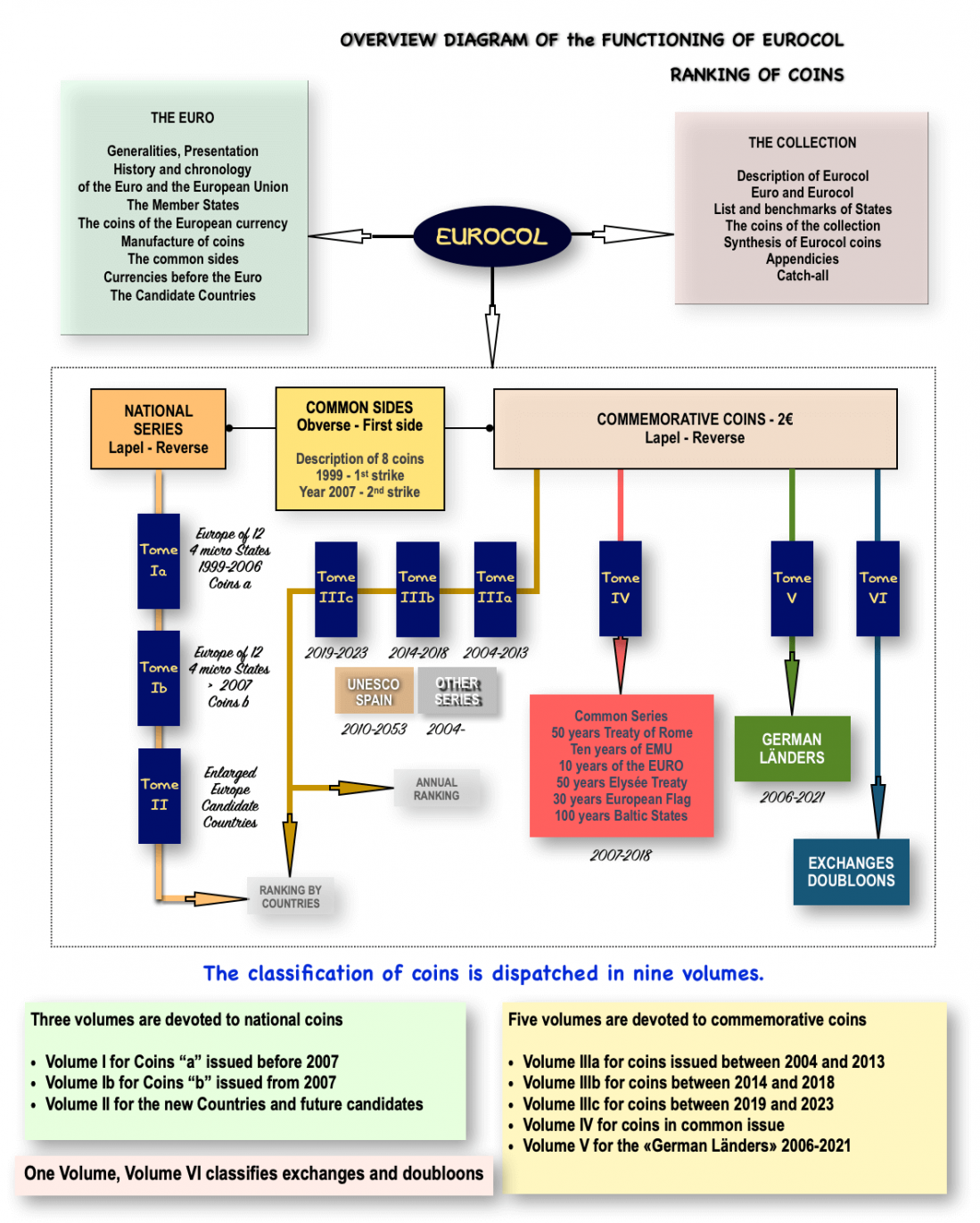 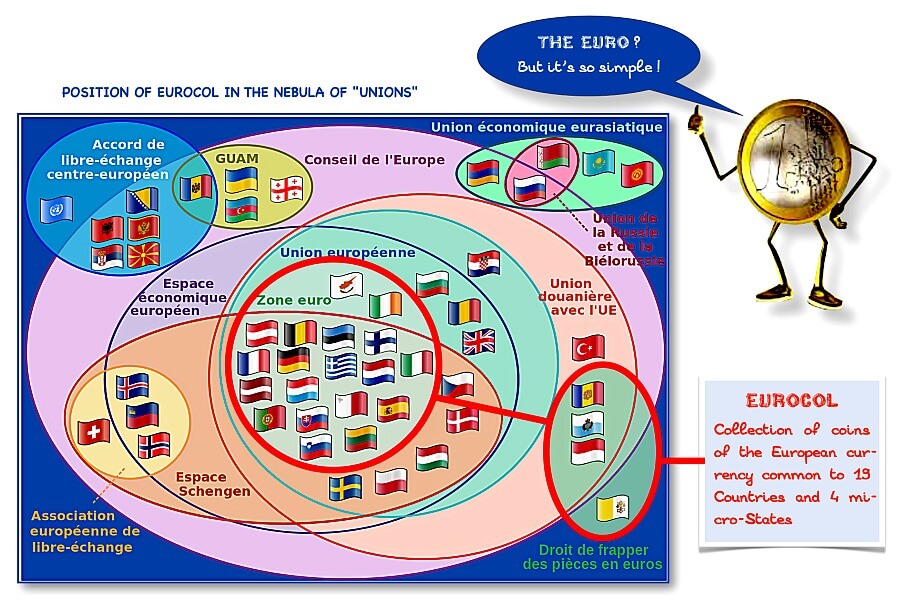 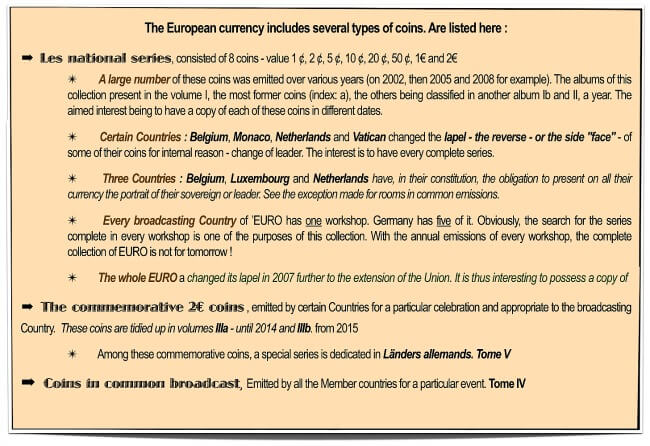 Limits of the collection

The monetary value of coins does not exceed 2 €?

Eurocol presents only the "circulating" said coins, that is the national series and the commemorative coins (2 €) of every Member country.

There are no bank notes in Eurocol?

It is nevertheless nice to see all these bridges and perfectly imaginary windows, symbols of opening of the European Union, but not, no bills, later maybe ?

Amateur numismatist, I do not take into account the ranking of coins according to their quality of engraving, or state of preservation today, " TTB - very very Beautiful, - Haughtiness, SPL - Magnificent, or FDC - Fleur De Coin ", as make him the real professionals.

On this matter, the definitions of the states of preservation and their index (40 - 70) are described in appendix, an extract supplied by the Association AD€ - the Friends of the Euro.?

Interests only me " the copy " of a coin. I do not try to find the same coin in another quality if I already possess a copy.

Other limit of the collection?

In the chapter dedicated in the " slices of coins " details are given concerning " piles A and crush B " coins of the European currency. Very interesting work of engraving but which I do not take into account for the moment.

The vintage years of coins?

Eurocol does not combine "all" the available coins, of every Country, of every year; it would be really boring and too voluminous. The annual vintage years are not thus all taken into account.

Following the extension of Europe, the previous coins on January 01st, 2007 modified their European face (to see the detail in the chapter " the European faces "). The European Union then decided to make redraw Europe, not so as to modify any more the motives for engraving in every new entrance of a member state to the EU in the future.

This does not prevent me from putting aside vintage wines of certain rcoins, even if I possess an other one, of different year... Reflex numismatist.?

There are thus 2 copies for a coin of the same value in the collection for certain Countries.?

Furthermore, certain coins are indicated ( c ) even ( d ); they concern new broadcasts due to the disappearance of a Head of state, the Pope or in a princely change in Spain or in the Netherlands for example. All the details in " national Series ".? 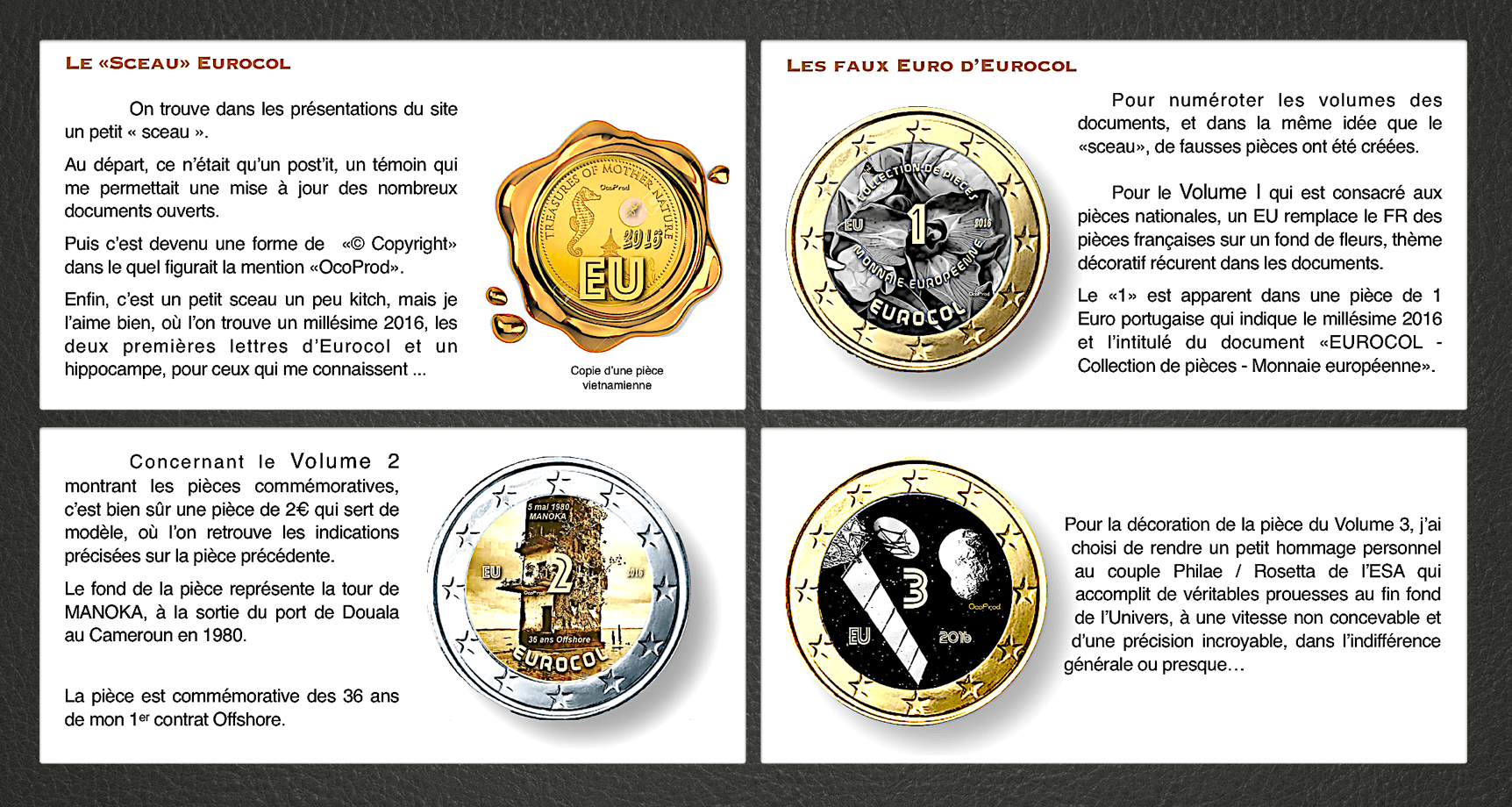 The coins of the collection

It would be easy - and expensive - to buy all the missing coins on the Internet and to optimize the quantity of coins of Eurocol. We can find 95 % of the existing rooms there, but that would miss a little of search.

Since 2002, I stored all the same a significant number of different rooms by numerous journeys and meetings of people interested in the barter of rooms and tickets. I support well by several storekeepers interested in this collec ' and who contributed - and it is always the case - in the development of Eurocollar. Several people know my interest in rooms and research, for example on "German Länders" images of each of sixteen German provinces, a series which contains 80 different rooms in fine (2006-2021). They are gathered in the Volume V.

There is a shape of "speculation" on certain coins which distorts a little the traffic free of these coins by overvaluing them. See on this matter in appendix the remarks expressed by the association " the Friends of the Euro " for the European Commission. These remarks date 2010 but explain very well the various mechanisms entailing this speculation.?

Explanation? : the editions of coins lower than 100 000 units are considered as " weak editions " compared with a national series of 30 million German coins for example.

The four micro states authorized to emit coins (Andorra, Monaco, San Marino and Vatican) have, due to their small monetary surface, broadcasts of 20 000 or 30 000 coins, what makes them much rarer than others and are "a little cannibalized" by collectors / retailers who de facto overvalue them before taking a good profit margin.

I want it by no means to these storekeepers, a little more ease to find these coins would be appreciated. It is only an opinion.

All the coins of Eurocol are exclusively cleaned with dry toothbrush, without any product then two baths with ultrasounds in the clear water and chamoisine. Nothing else.

They are then manipulated with a crowbar with tips blow up and placed under transparent protection to avoid affecting them.

At the same time as the very collection, some "copies" are kept either to start a nex collection which could interest a budding numismatist, or to serve as exchange with other collectors.

In every case it is the oldest coin (coin a) that appears in the Volume I concerned.

At present, in the end of July, 2021, are listed 975 potential coins for this collection and Eurocol holds 669 except "copies". He still has got a long way to go there so that she is complete, especially as, every year, 23 Countries may produce 2 coins (2€ commemorative) a year, even a 3rd one if it is an emission common as in 2015 with them "30 years of the European Flag".

Research and work in progress

A permanent update of EUROCOL is realized - it is even the own of the collection which aims to be alive.

Research for information sources - images, references, videos, conferences, texts, historical records to explain at best and in a concise way why such coin was engraved by such Country, which person is highlighted there, which are its actions, its life etc...

Certain particular geographical sites are also presented and engraved on coins: why these and not others ?

What particular role played such or such character in its Country ? For example the Slovene Primo€ Trubar or the Greek Elefthérios Venizélos.

Why to emphasize such event rather than an other one, as the Finnish fight for the right of the Women ?

Why certain coins were pierced, others hexagonal ?

So many questions deserving the most precise answers.

On the other hand, I am particularly interested in the series of national coins, following the example of German Länders which represents 80 particular coins. This serie is dedicated in 16 States German emphasized for their annual Presidency to Bundesrat.

Certain Countries began a serie of coins - as Spain since 2010 - which emits a coin a year for each of the Spanish sites classified in the UNESCO world heritage. This serie should contain later 46 different commemorative coins.

Malta, from her part, engraves a serie of coins commemorating its political Constitution and its various stages. And other national series...

It is interesting - for me - to know the political, social or emotional links linking certain Countries of the European Union; I think.

In particular in Baltic States remained for a long time under the yoke of the USSR, or the position of Slovenia in front of his Austrian and Italian neighbors, the Countries of ex Yugoslavia...

I also began certain researches on the origins of currencies before the Euro and wish to deepen the subject. We find on the new engravings the roots of the former currencies. I shall quote for the example Marianne and the sower appearing on our French national series or the harp always present since 1325 in the Irish currency. This cultural heritage allows to explain the choices of the Countries of the Union.