The EURO is the single currency shared by 19 Member states of the European Union, which, together, constitute the Eurozone. The introduction of the euro in 1999 marked a decisive stage in the European integration. It also represents one of its major successes: about 400 million citizens of the EU use it at the moment and take advantage of its advantages, which will broadcast even more widely as other European countries will adopt the euro.

Four micro-states (Andorra, Monaco, San Marino and Vatican) are also authorized to use the euro and two European countries, Montenegro and Kosovo, use it de facto while others have their national currencies connected to the euro.

Used from 1999 for the European financial transactions, it is put in circulation on January 1st, 2002 under its fiduciary shape. It succeeds the ECU, the "European Currency Unit ", put into service in 1979.

Creation of the Euro

January 1st, 2002, 304 millions of European change currency, 14 billion bills are printed representing 633 billion euros, 52 billion coins are struck for a weight of 250.000 tons of metal. It is the most important and most best orchestrated change which the European Union knew. The Union makes a deafening entrance in the XXIth century. But the history still remains to write and the monetary policy to be built.

Why the euro ?
In 1979, is officially set up the European Monetary System which limits the variations of the exchange rates between the European currencies. A country could not let its currency devalue or appreciate in a too important way with regard to those of his neighbors. For it the European states create a unit of account, European Currency Unit (ECU), which consists of various currencies of the EU, among which pound sterling. 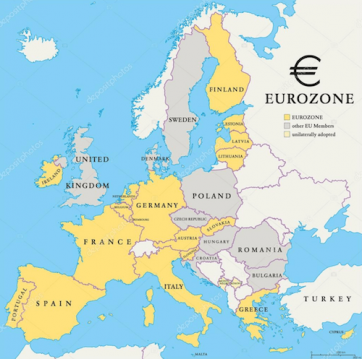 Timeline of the Euro

The European currencies will have to bind themselves in the ECU which represents the " European monetary stability " and not take down its rates (+/-2.25 %). These measures aim at avoiding that a country sees its currency losing of its value compared with the others, and so destabilizes the European, interdependent space economically.

In front of the failure of the control of parities, idea of a common currency totally terminating these monetary instabilities strengthens. The implementation of the euro results from a will to create definitively a stable monetary area in Europe to favor the state economies. This is the way in 1999, the euro is created.

The ECB : When the euro was thrown, the responsibility of the monetary policy was confided to the European Central Bank independent ECB-EUROPEAN CENTRAL BANK, which was created to this end, and to the national central banks of the Member states who adopted the euro. Together, these institutions compose the Eurosystem.

The Euro is the currency of the 375 million people who live in 19 countries of the Eurozone. It is also used - either officially as official rate, or for practical reasons - by a whole series of the other countries, as close neighbors and the former colonies.

It is not thus surprising that the euro quickly became the second international currency after the dollar and even exceeded it in some respects (e.g. the value of liquid assets in circulation). 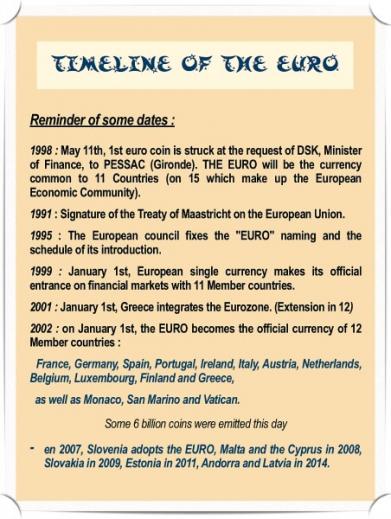 The euro is managed by the European Central Bank ECB which sits in Frankfurt and by Euroystème compound of central banks of the states of the Eurozone. As independent central bank, the ECB is the unique authority having the power to fix a monetary policy for the whole Eurozone. Euroystème participates in the impression, the strike and the distribution of billets and coins in all the Member states. It also watches the smooth running of the systems of payments within the Eurozone.

Utility : Besides the fact that it facilitates largely the journeys, a single currency presents a considerable economic and political interest. The frame in which the euro is managed in fact a stable currency, with not much inflation and weak interest rates, and incites to guard healthy public finances. The single currency is also the logical complement to the single market, which confers him a bigger efficiency. The recourse to a single currency strengthens the transparency of the prices, eliminates the expenses of exchange, puts some oil in the cogs of the European economy, facilitates the international exchanges and allows the EU to make his/her voice heard better in the world. The size and the strength of the Eurozone also insure him a better protection against the external economic shocks, such as the unexpected increases of the oil prices or the disturbances of financial markets.

Finally, the euro brings to the citizens of the EU a tangible symbol of their European identity, of which they can feel all the more proud as the Eurozone spreads and multiplies these advantages for his existing and future members.

All the Member states of the EU are a part of the economic and monetary Union (EMU), which can be described as a stage of economic integration moved forward based on a single market. It supposes a narrow coordination of the economic and fiscal policies and, for the countries which satisfy certain conditions, a common monetary policy and a single currency: the euro.

The process of economic and monetary integration in the EU is parallel to the history of the Very union. During the foundation of the EU in 1957, Member states concentrated their efforts on the construction of a "common market". However, over time, it seemed that a narrower economic and monetary cooperation was desirable for the development and the prosperity of the internal market. But it is only in 1992 when the objective of a full UEM and a single currency was registered in the treaty of Maastricht (handled on the European Union), which defined the fundamental rules of its introduction, worth knowing which are the objectives of the UEM, which is responsible for what and which are the conditions which Member states have to perform to adopt the euro. These conditions bear the name of "convergence criteria" (or " criteria of Maastricht ") and consist of a stable and weak inflation, a stability of the exchange rates and the healthy public finances.

The Euro was created by the measures of the Treaty of Maastricht in 1992. To participate in the single currency, Member states are supposed to answer strict criteria such as a budget deficit of less than 3 % of their GDP (GROSS DOMESTIC PRODUCT), a debts lower than 60 % of the GDP, (two criteria which were regularly scoffed after the introduction of the euro), a weak inflation, and interest rates close to the average of the EU. During the signature of the Treaty of Maastricht, the United Kingdom and Denmark obtained options of retreat not to participate in the monetary union which would be translated by the introduction of the euro. 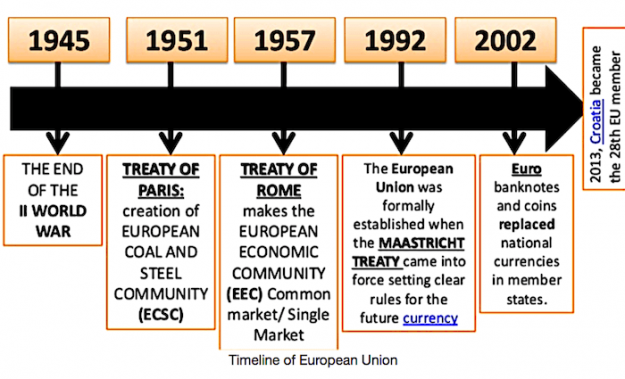 Extension of the Eurozone?

The membership in the euro is compulsory for the new members of the European Union, but every country in basic salary the date and has to respect the necessary economic conditions.

?User countries of the euro
On January 1st, 2015, 19 countries of the European Union use the euro as national currency. Thus in these are added four States except EU having agreements official and using the euro in a official way as well as two other States having adopted him one-sidedly. The case of the British bases in Cyprus is particular: the treaty of independence of Cyprus planned a shift towards the Euro there; this peculiarity is planned by the Treaty of membership of Cyprus and by the right British.

Currencies connected to the Euro

Because of preliminary agreements (with the French franc and the Portuguese escudo), African and oceanian currencies are bound to the euro by a fixed rate :

The convertible mark of Bosnia and Herzegovina (code BAM) corresponds besides to the value of former Deutsche mark, and thus finds itself bound to the euro by a fixed rate equal to the rate of conversion DM / EURO. Also, the lev of Bulgaria (code BGN) had one-sidedly been fixed to parity with Deutsche marks and thus benefits from the same exchange rate towards the euro.

Because of different alphabets names and national divisions of the euro are not spelt and do not pronounce in the same way in all the countries of the zone.

Because of the diversity of the grammatical rules within the Eurozone, the "euro" word on rooms and tickets is invariable and does not set of "S". However, in the French language, while he does not pronounce; by customs and uses to the paper, a "s" is generally added to the plural. The Académie française pronounced in this sense in a note published to the Gazette of December 2nd, 1997.

On the other hand, in France, the term "one hundred", being confusing, is not generally used in French; we speak about centime or, in a rarer and disadvised form, of one eurohundred (not to confuse with the centimes of franc during the passing phase). For similar reasons, it is said centimo in Spanish, centesimo in Italian, lepton (plural lepta) in Greek, while does not cause this problem in English, for example, language in which it is adopted as it is.

As regards Eurocol, EURO is invariable.

The Eurozone is a monetary area which includes the countries of the European Union which adopted the euro (EUR, €) as single currency. On 28 Member states of the EU, 19 use the euro. These 19 countries represent more than 338 million inhabitants in January 1st, 2015. The Eurozone was created in 1999 by eleven countries:

Tickets and coins circulate since January 1st, 2002 but are made since the 1er january 1999 in eleven founding countries. Several criteria are necessary to join the Eurozone: a public deficit lower than 3 % of the GDP (GROSS DOMESTIC PRODUCT), a national debt not exceeding 60 % of the GDP, a mastered inflation, an independence of the central bank of the country and a stable national currency during at least two years within the MCE II.

The intervention rate refi by the Eurozone, fixed by the European Central Bank, is 0.000 % since March 10th, 2016 (it is published on the site of the European Central Bank). From the beginning of year 2010, with the release of the Greek public debt crisis, then the Irish crisis, the Eurozone enters for a period of turbulences. During numerous meeting of European advice(council) and numerous European summits, global architecture of the Eurozone is going to know profound evolutions.

Besides nineteen member countries of the UEM, four micro-states use the euro as official currency legally without being members of the European Union. The previous agreements allowing these micro-states to use their currency in parallel of that of their respective neighbor were seen renewed.

This situation allows them to have their own national faces on the coins which they emit in euro.

I shall add that these four micro States do not participate in strikings of coins "in common broadcast", because "not members".

Without formal agreement, Montenegro and Kosovo use the euro but its use is not governed by a monetary agreement