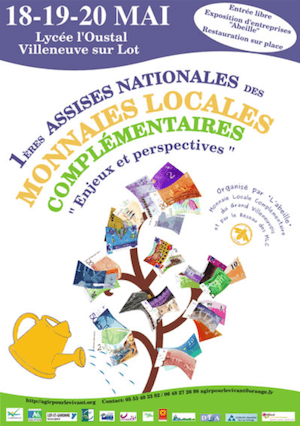 Desertification of small shops, relocation, unemployment, or still loss of social links, exchanges it maybe a way to regain control the economy and to make it more human. Indeed, the local currency allows to build and to protect the integrity of a territory and to open to the others by exchanging its wealth without putting itself in danger. The purpose is not to compete with the national currency but to create a complementary currency which can mitigate the deficiencies of the current monetary system become uncontrollable, in this time of economic crises.

So, once the organized currency, the private individuals can buy purchase vouchers in local currency (1€ = 1 local monetary unit). These vouchers are accepted by the professionals members. Euros converted in local currency constitute a guarantee fund placed in an ethical bank to support projects joining in mind of the charter. So, the local economy is revitalized, the social links rebuilted and the evolution of favored consciousness.