The numismatists waited for it!
The first commemorative coin of Ireland was struck in January, 2016 to 4 500 000 copies

on the roof of the Central post of Dublin, which served as headquarters of the uprising. Behind the statue, the rays of sunshine to symbolize the uprising, the proclamation and the birth of a new nation. At the top, the name HIBERNIA, in a font reminding that of the manuscript of the Book of Kells. Around the statue, 1916s and 2016. Under the statue, the mention of the broadcasting country and the year 2016. The external ring of the coin contains twelve stars of the European flag.
The coin was the object of a competition, threw in January, 2015 in Irish Times. 52 projects were received, among which 6 were selected by a panel indicated by Bank of Ireland exchange for a second tour which indicated two winners : one for the 2-euro coin and an other one for the golden and silver coin.

Hibernia or Hibernie or Hybernie is the Latin word to indicate the island of Ireland. Romain called the North of Ireland Scotia in reference to Scots which lived in this place. The name Hibernie attributed by Latin in Ireland would result from the strong influence of the winter which characterized this region in the eyes of Mediterranean people.

The Celtic harp, still called the heraldic harp or the Gaelic harp, is a part of the Irish landscape for centuries. In 16th century, it was raised to the rank of official symbol of the country when King Henry VIII began to make it engrave on the Irish currency. But we find tracks well before the reign of the latter: at the end of the 11th century, King Gruffydd ap Cynan committed harpists to its court to distract him. 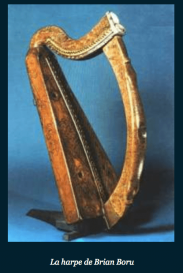 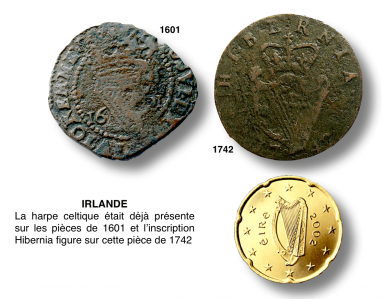 More details of the Irish coins

History of the currency