In May, 68, a phenomenon not only in France

The Belgian coin of 2018 commemorates this period

The student compost from Liège, at the time, was mature as in France to let decorate with flowers the revolt. As calls back it Guy Quaden, who was one of the leaders of the movement in Liège, " it already had been several years since the ideas germinated at students' minority, of which I was a member, a minority " raised awareness ". We wanted to democratize the university, the structures of which seemed to us old-fashioned and totally unsuitable upon the arrival of our generation of babyboomers.
It also needed there and the desire to unjam an exceeded society ". A wind of freedom blows, political small groups emerge within the ULg, opposed to the war in Vietnam or said "leftists".
Everything seems possible.

The Belgian commemorative coin of 2018 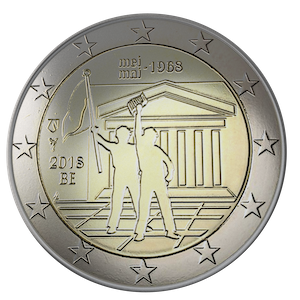 The image shows in background the building stylized by the university, in front of which are present students with flags and their demands registered on paper, pamphlets in the right hand. Above the inscription in " May, 1968 ", to the left of the motive are the marks of Herzele, the Dutch currency Utrecht, as well as "2018" and "BE". On the outside ring, twelve stars of the European flag are represented.