Auguste Rodin (René François), born in Paris November 12th, 1840, died to Meudon, November 17th, 1917, is one of the most important French sculptors of the second half of the xixe century, considered one of the fathers of the modern sculpture.

Heir of the centuries of humanism, the realistic art of Rodin is an outcome, a crossing of romanticism and impressionism the sculpture of which is modelled by the fight between the shape and the light. The virility of the artist, nicknamed at the appropriate time the " Sacred Billy goat ", caused semipublic or private dramas, and is in the center of a plastic expression of the sensualism, the eroticism, but also the pain. By its capacity of work, organization Rodin leave a work except standard.
Auguste Rodin's work consists about 7 000 sculptures, 10 000 drawings, 1 000 engravings and 10 000 photos. For sculptures the used techniques are the modelling in clay, the direct plaster, the bronze, the molten glass, the ceramic and the marble. Its main subject is the male or feminine human body, of which the portrait. In front of the scale of its work, in number and by its imagination, in front of its universal reception of its work, we can only comment that a part of this one.
The French commemorative coin of 2017. 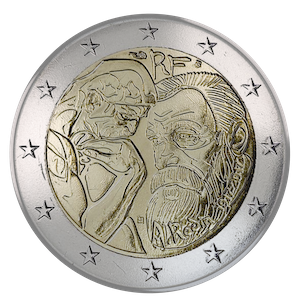 To the left, a part of the sculpture The Thinker, the side view and managed towards the right. To the right, the effigy directed to Auguste Rodin's left. In the beard of this one, the signature A.Rodin followed by the years 1917-2017. At the top, the abbreviation of the broadcasting country RF (for French Republic). The external ring of the coin contains twelve stars of the European flag.