The Discobolus is one of the most famous statues of the Antiquity. Generally attributed to Myron, Athenian sculptor of the ve century BC, It represents an athlete throwing the disk. Myron, representative of the first classicism, was famous for his athletes' representations, what explains the allocation. Furthermore, It is mentioned by Pliny the Elder in Natural histories, where the author delivers the list of the works realized by Myron.

The original statue representing a naked, beardless, motionless athlete while he prepares the throw of his disk. The head is turned on the side. The movement spreads on the side, giving a bidimensionnelle composition (what is characteristic of the pre-classicism). The composition is geometric, theoretical. Indeed, the edge of pectoral muscles is clear, the muscle structure is made by plastic and theoretical forms which answer. The character, while in full effort, is impassive, the serene look and without expression. Eyelids are heavy, the straight nose, the fleshy and slightly half-opened mouth, the thick jaw, the strong chin. We idealize the face so that its image gains a timeless aspect.

The Greek commemorative coin of 2004. 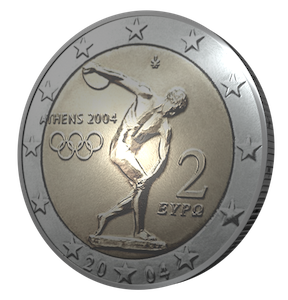 Twelve stars of the European Union placed around the outside ring surround the drawing of an antique statue representing a discobolus on the point to throw the record. The base of the statue encroaches on the outside ring of the coin (left outside). The logo of Olympics "ATHENS on 2004" and five Olympic rings are represented to the left, whereas the figure "2" and the word "ΕΥΡΩ" are to the right. The vintage wine is indicated on both sides by the star placed in the center in the bottom, in the following way: 20*04. The mark of workshop is over the head of the athlete to the left following way: 20*04.