Tribute to the Federal Council - Bundesrat

The Bundesrat is one of Germany’s five constitutional bodies. Through it, the Länder contribute to the legislation and administration of the Federation. 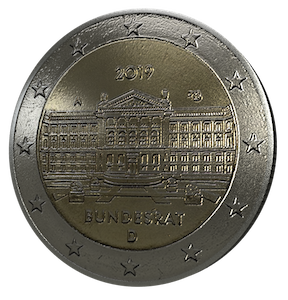 Presentation of the garden and the entire building of the Federal Council. At the bottom of the centre, the name of the institution «Bundesrat» and «D» for the Country transmitter Deutschland. Above the image is the emission year “2019” and on the left is the manufacturing shop ( “A”, “D”, “F”, “G” or “J”). The initials of the artist Michael Otto around the topic straight up.

Start a new thread in Germany 2019