100 years of the first meeting of the Dáil Eirean

Sinn Féin appears to be the main political force on the island of Ireland but refuses to serve in the United Kingdom House of Commons in London. Instead, the elected representatives of Sinn Féin decide to set up their own parliament in Dublin, the Dáil Eireann. This new assembly met for the first time on 21 January 1919 at Mansion House.
At the time of the election, the majority of Sinn Féin’s deputies are in prison, Ireland, England or Wales. As a result only 27 Teachta Dála participate in the first meeting of the Dáil Eireann. This first Parliament lasts 892 days.

The Irish commemorative of 2019 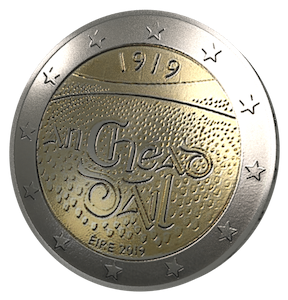 Presentation of the first session of the Dail Eireann in the "Round Room" of the Mansion House (official residence of the Mayor of Dublin). The upper "bar" represents the gallery with spectators, which arches the large plenary room with the many points represented by points below. At the center of the inscription "An chead Dail" (which means parliamentary meeting of the first Dail) is in Irish writing, above the year "1919". The name of the country "EIRE" and the year of edition "2019" complete the motif.