50 years of the launch of the satellite ESRO-2B

On December 15th, 1968, HEOS 1 is launched by the US base of Wallop by one Delta on an orbit of 424/223428 km, tilted to 28,3 °. Of a mass of 108 kg, HEOS is in charge of collecting information on the interplanetary particles and of raising the map of the ground magnetosphere.

The Belgian commemorative coin of 2018 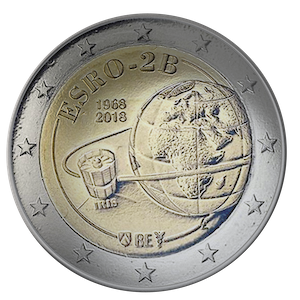 The coin represents to the center the satellite ESRO 2B in orbit around the earth with the registration "IRIS"; at the top left in a semicircle the words "ESRO-2B"; in the center to the left the year of the launch of May, 1968 and the year of emission "2018"; in the lower center, the initials of the broadcasting country "BE" with to the right mark of the Dutch currency and the director of the Belgian currency. To the right, the initials of the designer Luc Lucycx "LL" On the outside ring of the room represent 12 stars of the flag of the European Union.